I was filming some solo sexy content for my Loyalfans page yesterday and wasn’t at all happy about how my ass looked.

It’s fine , it looks hot but it’s not spectacularly tight as it was when I had my personal trainer working with me every day pre-pandemic.  Then with all the gyms in the city being padlocked since last April the only ass isolation exercises I had done was the few times I decided to walk up the stairs in the old building.  I’d try to see how many floors I could make it up before calling it quits and grabbing the lift and I’d never make it past the 10th floor so I gave up.

It was disappointing because I’d have these tremendous thoughts and ambitions of actually two-stepping it all the way up the 36th floor and whistling dixie while doing so.

The reality was … I’d be chest heaving and nearly puking over the railing by the 9th floor and would have to sit down before using the fire exit door to get to the lift , else my legs would give way walking down the hallway. 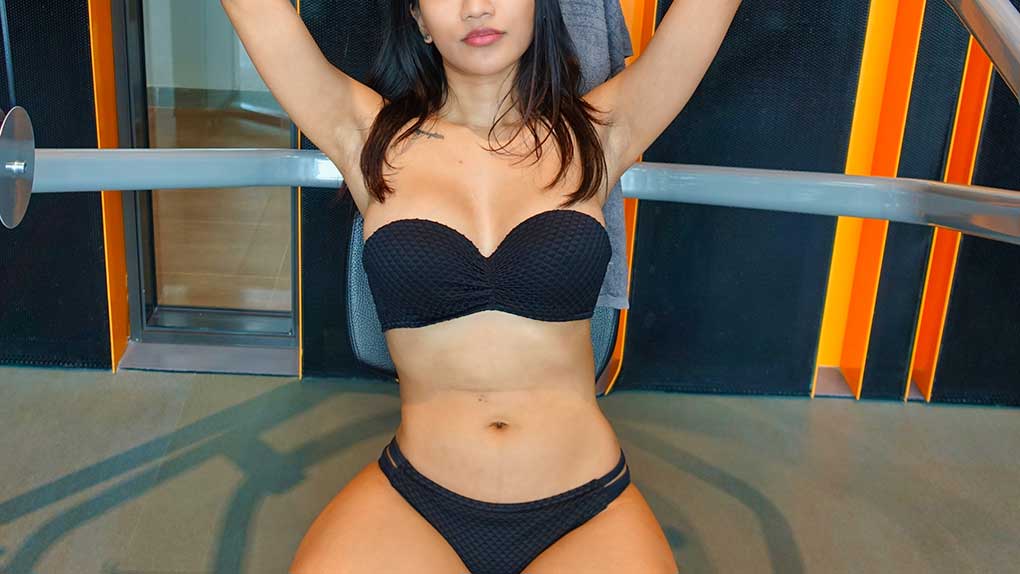 So I put exercising on the back shelf all through the spring and summer and now that it’s fall – what with the gyms open finally – I renewed my commitment to once again having Asia’s finest ass.

So at 6pm last night I strode into the gym and with the confidence of a plumber working under a cow , I was ready to rock ‘n roll ‘n lift weights.  Hell, I’m only 35 , my youthful days are still with me , I don’t need to ease into anything.  Fuck easing.  All or nothing I say !!!

My brazenness backfired.  In a big big way.

Maybe it was the 200 free style squats that pushed me over the edge?

Or perhaps it was the 50 barbell squats.  5 sets of 10 reps each , stacking more and more weight for each set … trying desperately to get within 20kgs of the weight I used to be able to free squat a short two years ago.  (<- see, I’m still wary of typing the words “two years” as I’ve been accustomed to that being banned on OF)  lol.

Could it have been the 50 leg extensions , or was it the 100 leg presses with pyramiding weight that did me in?

Might have been the 10 minute skipping drill too now that I think about it.

Point is, for 2 hours yesterday I exercised like a woman possessed.  Every set I was just envisioning shitting down Tim Stokely’s mouth which gave me Wonder Woman like super powers and I was able to use that rage to push myself way beyond what I had hoped I could muster. 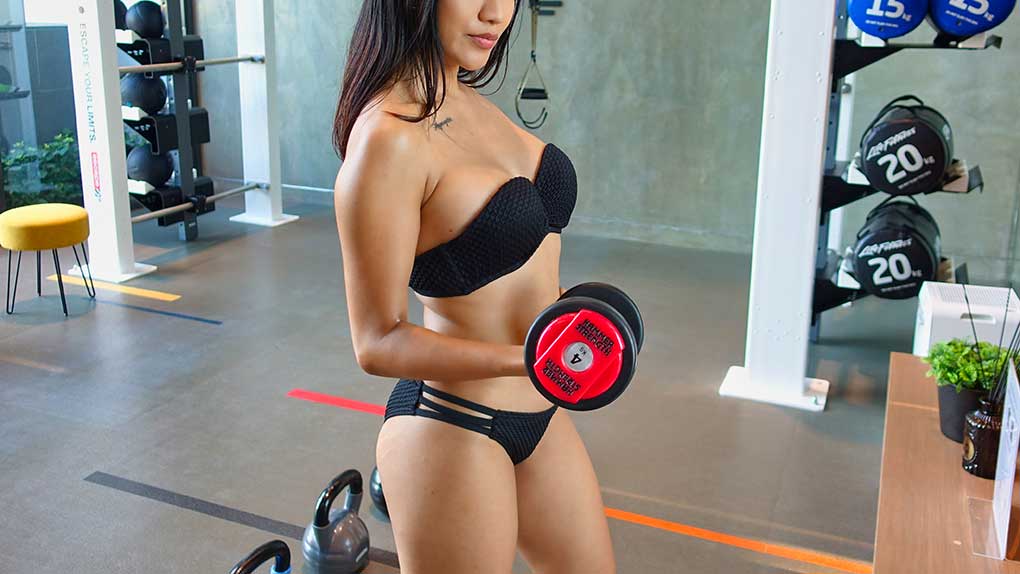 Then I woke up this morning.  I had posted on Loyalfans last night just before midnight that I couldn’t keep my eyes open and that I’d have to get back to loading all my content in the morning.  And so , off I went to have a “quick nap” which turned out to be 8 hours of being out cold and unmoving for I awoke in the same position and same blanket position as I had hit the bed with.

Only, I couldn’t move.

It took me a whole 5 minutes to be able to swing my feet over the side of the bed.  But given that I had to pee so bad I had to find a way to make my way over to the toilet.   But oh , the pain.  I could not for the life of me even bend my legs 1 inch.  Nor could my failing calf muscles support my weight trying to shuffle to the bathroom.

Had I been living in my old condo , with those steep stairs leading up to my loft bedroom I would have had to shit on the floor.  I kid you not.  There was no way I could have even butt scooted down those steps , I was in that much pain.

So, don’t laugh – but the way I managed to navigate my way to the bathroom was by crawling along the floor balanced on my right hip bone with my legs extended straight out behind me.

Which was fine but man oh man , hoisting myself up was a chore.  I had to use the toilet as a climbing mechanism – clinging to it like my tampon clings to my pussy on the 5th day of my period.   (see, I’m now purposely putting in all the banned words I had to avoid on onlycunts , err onlyfuckfaces, umm , onlyfans ya that’s the name)

(I feel like I’m David in the scene where he tried to get himself arrested in the movie An American Werewolf in London … by yelling out obscenities.  Cunt, piss , shit , tim stokely’s a faggot , meet, scat , diapers , paypal , loyalfans.  LOL  ok got that out of my system again … fuck it feels nice to write for my own website again …)

If standing up was a challenge, you should have seen the way I plopped myself down on the toilet seat while simultaneously raising both my legs off the floor as my ass hit the seat in order not to have to bend them.  Had I been a dude, I would surely have crushed my balls as I landed imperfectly on the front rim of the seat.

To stand up I had to lean forward to grab the door handle and use that to hoist myself into an upright position but I had forgotten the floor crawling maneuver I’d used to reach the bathroom in the first place.  Instead I tried to shuffle back to my bed like a 90 year old woman and nearly fell flat on my face doing so.  Ended up needing to go from furniture piece to wall grip until I could collapse face first into my bed again.  And it was like that I stayed until just after lunch time today when I could at least bend my knees an inch.

Oh my what a day of absolute pain it’s been.

I am most certainly not Wonder Woman when I’m not shitting in Tim Stokely’s mouth that’s for sure.

It’s going to take me a month of gym visits to get my body used to pumping iron again isn’t it?

So that’s a whole month of stiffness that I have to look forward to , which is awesome for a man but not so much for a woman. 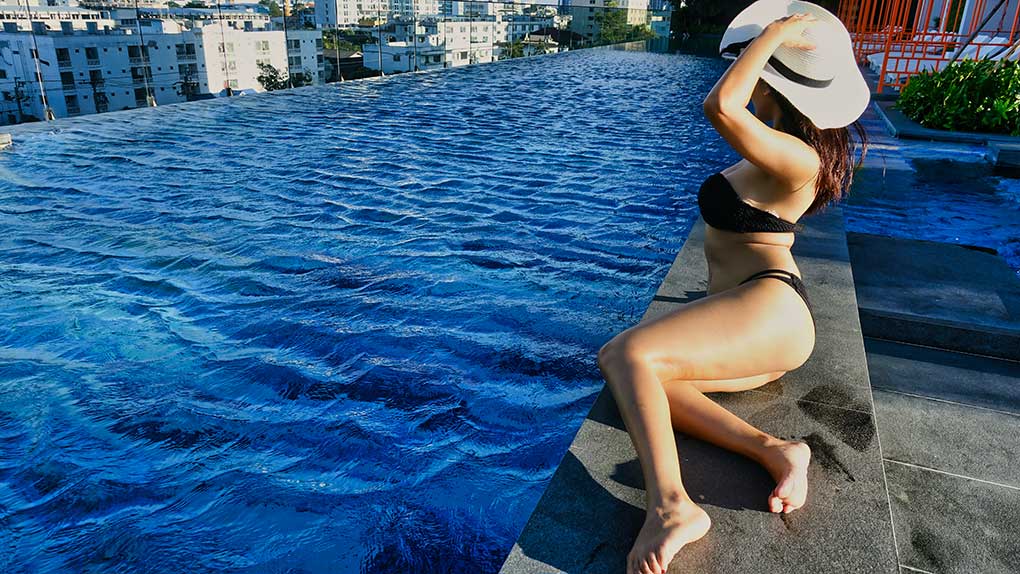 We’re assembling the face sitting chair this afternoon.  Mistress Wael is going to use it tonight or tomorrow – whenever she has to release her massive stored up shit – and if the rumors of the chairs efficacy are true … then there will be no escape for her slave.  It’s supposed to be air tight and completely suffocating.

I can’t wait to use it as well.  But that’s going to have to wait a few days as I’m waiting for the 7 day trial to expire before loading all the face sitting and HTT stuff to Loyalfans.

Mistress Wael is going to be sending out her HTT and Face Sitting videos on my Loyalfans via group messages , just like we had been doing on OF for the past 3 months.

They’ll be ppv of course , but it’ll be yet another way to see her awesome content , so sign up for my Loyalfans , the content is coming hard and fast every night. 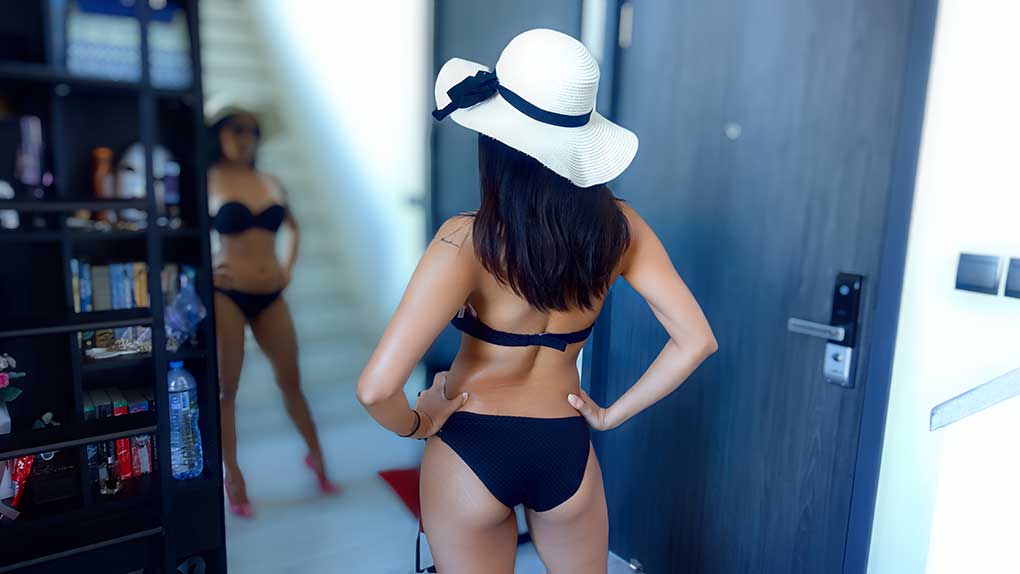 Tomorrow is supposed to be boob day , err chest day at the gym.  Come hell or high water I’m pushing myself to get that workout done as well.  Might as well put my body into temporary rigor mortis and get the initial stiffness over and done with as soon as possible.

My ass, is going to be legendary once again.

Just let me be able to bend my knees again and you’ll see … dedication , commitment , perseverance.   Fuck I misspelled every one of those words.