One of my favorite things to do when it comes to Tease & Denial sessions is to work with Wael in a double mistress session that covers both the afternoon and evening , using a method that we call Pre cooking the balls.  Let me explain.

To me, there ‘s nothing better than teasing a guy for a full two hours and sending him out my door with no orgasm whatsoever , just a very leaky cock.  The enjoyment comes from the text messages soon thereafter where the test subject will lament the aching gnawing pain in his balls , so much so that at times it’s been reported that walking is even hard to do.  So what the double mistress session does is it just plays on that idea and carries it to a different level. 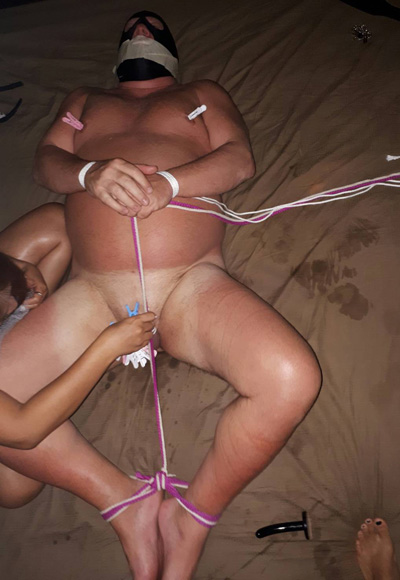 Then when he gets to my condo , unlike Wael where she gets right to the hands on teasing , I’ll just let my looks , conversation, and light caresses create a hard on that can pop through any Levi’s zipper , even the button down jeans can’t contain the hardness I rekindle down below.  Granted some of that hardness is caused by me , but a great deal of it comes from this  “carry over syndrome” where , well , it’s kind of like residual tiredness that athletes experience in sports.

An athlete who plays on a Monday and a Tuesday won’t feel overly tired on the Wednesday.  The hangover of fatigue doesn’t fully kick in until the Thursday for whatever reason.  That’s scientific shit from my volleyball days back in school , and ya I know I’m fucking short and had no business playing volleyball , but it is what it is and that was my sport back then so deal with it.

So whereas athletes experience residual tiredness, my submissive men experience residual hardness.  It’s the carry over from the afternoon teasing session that produces the hardest boners I’ve ever seen constantly.  Take it from someone who’s now seen about 10,000 boners in my lifetime , there is no redness, soreness, throbbing in a normal boner like we get from this pre-cooking method.  It’s rather cruel.

Now where I go with that once I have you so hard, well that’s up to me isn’t it?

If you don’t please me , there’s always the threat of being sent home in chastity.  Even if you do please me but something isn’t to my liking , there’s the terrible spoiled orgasm where this pre teased dick will leak endlessly for minutes on end.

Of course there’s the tremendous let down of jacking off for me which does give you some semblance of relief but isn’t wholly satisfying now is it?

Are you prepared for all that?

If you think you are, remind yourself first that overconfidence is a slow and insidious killer.