I have goals that I write down at the start of every year month and week , for without a clear direction time can be wasted , and isn’t that the ultimate sin since we’re around on this planet so briefly?

Woke up this morning to find an email from my friend telling me that George Michael had died on Christmas Day and I thought , come on really – him — HIM ?  I posted my disbelief on my Twitter and got an instant reply from somebody saying “get used to it , it gets worse.”  That reply bugged me so much that I deleted my post and I tried to reflect a bit on what it might be like to in fact be forty nine years old and not twenty nine.

I’d imagine growing up twenty years before I did , one would have related their childhood to inspirational figures like George Michael , Prince , David Bowie , Muhammad Ali , Alan Rickman , Kimbo Slice, Gordie Howe … and closer to home : our king , as my mom was – and still is devastated by his passing.

I suppose what that guy meant in his reply is that people you knew and loved slowly pass away one by one , almost unnoticeable until suddenly you find yourself alone.

That’s why I have so many goals , I feel such an urgency to get to where I really want to be because it seems so far and unattainable , especially with my personal clock approaching thirty.  I may not know what it’s like to be fifty , but I do know how fast life went from age ten until now.

That’s an excerpt from a nice email somebody sent me – one which made me scream out loud in frustration as he accidentally pointed out my biggest failure this year – I still haven’t finished my first book.  I don’t want people to write about me, I want it to be me who does the writing !!

Where can I find the time?  I’m learning German full time , writing blogs , training for my first Muay Thai fight , answering email , doing two sessions a day and learning how to drive.

Well in fairness, I accomplished learning to drive back in October.

I’ve been thinking about what this profession is evolving to.  It’s clear as a bell to me to me now why the original Jaa retired after five years of being a mistress.  How this job breaks down is like this.  Every month I get on average one hundred session requests and from those I filter them down to fifty sessions I’d be interested in doing.  Out of those fifty sessions, ten will cancel leaving me with forty guys I actually get to meet.

From those forty sessions, about thirty will have been a very memorable two hours , and again on average 25 of them will make definite arrangements to come back and see me.  So you can see where the repeat sessions start to snowball when added to the new session requests and one could very easily make this a life’s profession on such a business model. 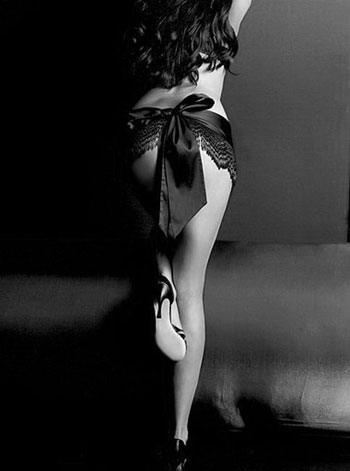 But here’s the secret of the mistress industry.  Just as it was for Jaa , so it is for me ; that out of those thirty fabulous sessions per month ; one person is absolutely guaranteed to deem the experience life altering for him.  So much so that his devotion becomes an obsession.  That leaves twelve smitten men per year and of those , up to three of them will be lifelong slaves.

I’m talking so financially , emotionally and spiritually devoted that his life’s purpose becomes making me happy.  If I wanted a guy to walk like a dog behind me through the streets of Bangkok with his wallet in his mouth as I went shopping – my biggest problem would be deciding on which man of my harem would I choose.  This is the path of devotion I was referring to when I wrote about my fascination with no longer doing toilet training sessions but instead bestowing the honor of eating from my ass upon the most worthy of my slaves.

If I want a car to take me to Pattaya and have the driver wait for me all day while I rest on the beach – I simply need to text three people at most and choose the first car to arrive.  Upon returning to my condo just before midnight it’s totally on me whether I ignore the guy who treated me so nicely this day , or whether i let him kiss my foot, or whether I kick him lightly in his balls , or perhaps fuck it – I lean over and french kiss him if I really want to fuck up his mind and ratchet up his devotion to me.

Thing is , as lucrative as that is , it’s not what I want.

I want all this to evolve so that in the end I’m known as a writer.  A novelist. 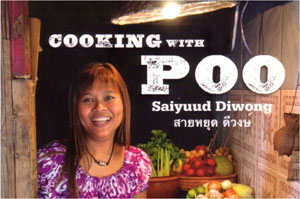 Ya go ahead chuckle , laugh , roll your eyes – by all means doubt me.  How many Thai novelists are there in the world ?  One that i know of , and that’s only because her name – being the word Shit – made her cookbook a coffee table talking piece.

Look, I’ve read Fifty Shades of Grey , it made me throw up in my mouth a bit.  I’ve read other mistress’s novellas , about twenty of them , I can’t get by the first chapter on most.  Not because of how poorly written they are , but because the “submissive / mistress” relationship described is just erroneous , it’s nonsensical fiction that never ever happens in a a real life situation.

One “dominatrix”novelist wrote a story about her slave carrying an enormous letter “M” made out of logs (for mistress I suppose) on his back as he walked around in circles in her backyard all day.  This – according to her – got the devotion out of her slave that she was demanding.  Fuck really?  I got more devotion out of my session date last night when I grabbed him by his dick through his pants and pulled him out of line at El Gaucho restaurant because the staff wasn’t being attentive enough to us and he didn’t seem to notice it displeased me.

In each blog story I try to give you a snapshot into my mind so you can get a taste of how a girl like me is wired differently than other girls you may have come across in your life.  A novel would just be a great collection of those snippets , I fucking need to get going on writing them all out for you. 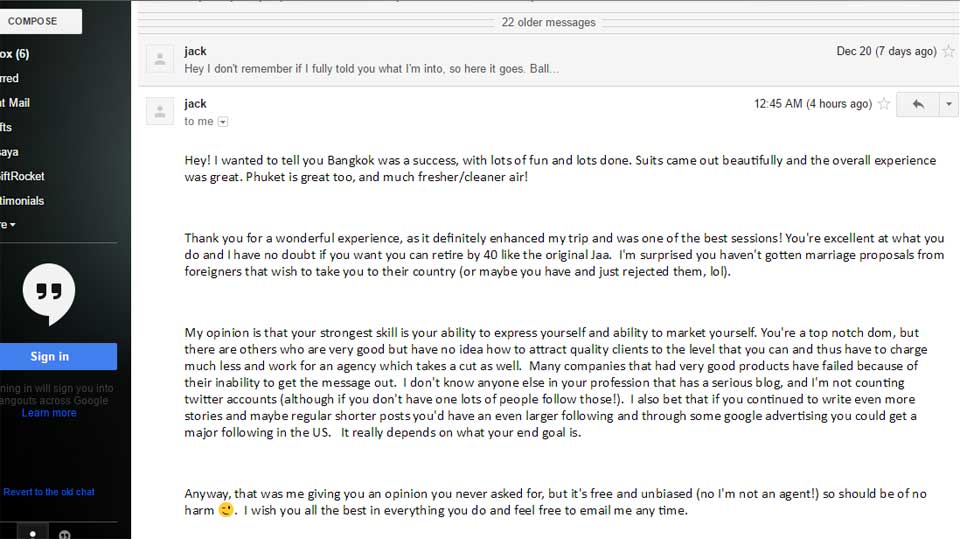 That’s just the most recent of emails talking to me about where I need to go with this , there are many of its ilk.  For me , 2017 is going to be the year where I write my ass off and let’s just see if I can grow from being the most professional domina in Bangkok to a more internationally acclaimed mistress.  Kind of like Auston Powers – International Mistress of Mystery –  but without the glasses and chest hair.

Now that’s been said , it’s time to fuck off on vacation for a couple of weeks.  lol.

Well I can’t very well be inspired by these condo walls can I ?  I need a beach , and not just any beach.  A foreign beach with cascading mountains in the background and a cool coconut scented breeze enticing my senses as the water from the lagoon laps at my sandy toes – which dangle from my slave,  kneeling as my foot stool for the day.   taa taa boys.

If #seduction was an elective course back in University , I’d not only have my Ph.D in it, but I’d be the dean of the faculty by now. pic.twitter.com/qa0VJvA9fM