I had an epiphany last week.  It occurred while I was watching the latest Resident Evil movie.  I spend 2 hours each and every day pretty much sitting in a movie theater watching a movie that I absolutely hate because watching it makes me stupid.  Hollywood thinks I am an idiot.

It’s as if the day after Roger Ebert died the entire movie industry let out a huge sigh of relief and said,  finally we can make movies as dumbed down as we want.  The movies now are so fucking bad that it makes me sick to my stomach to have to sit through one of them.

At one point in Resident Evil I stopped watching the movie to do two experiments.  The first one was to actively try to count the edits in a one minute period , do it ten times and average out the number of cut scenes my eye has to absorb in a sixty second time frame.

You know what the purpose of that is … because lets face it , you don’t put out a hundred million dollar movie without being actively aware of the product you’re shipping … the purpose is to bombard you with so much sensory overload that your brain can’t possibly reflect on what a bag of shit you’re watching. 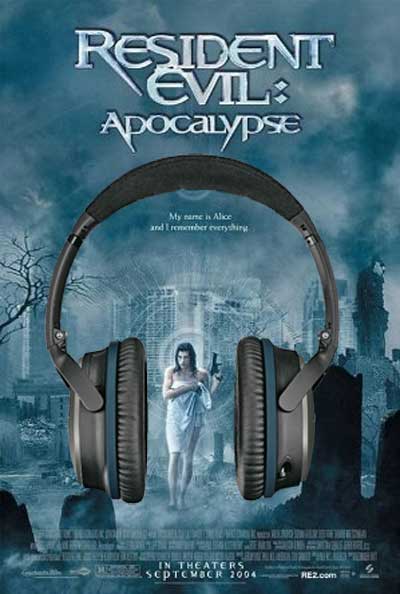 My second test wasn’t as scientific, but I wanted to see if by fully plugging my ears if I could still hear the movie and dialogue (what little there was) without straining.  The answer … I nearly smashed two holes in my brain trying to create a perfect vacuum and the movie was still excruciatingly loud.  So I did one more experiment.  I got out of my seat , walked out of the theater and pressed the door ajar , and began counting the number of steps I could get from the theater before I stopped hearing the sound of the movie.

I got 40 fucking steps away from the theater , almost to the bathroom before I couldn’t hear the film any longer.  Also fucking insane.

I want to go back and see the movie again , this time with a set of Bose noise block headphones , the kind that block out all noise from the outside world , and see if watching the movie with those on makes the movie more enjoyable.  Probably not because?

I have yet another theory , but I’d need a comprehensive knowledge of guns to properly calculate the ratios , and as I have zero knowledge of such things I’d have to guesstimate.

Ok , i’ll make a one time exception for Star Wars as neither Darth nor the Emperor had the foresight to teach aim to their droids and storm troopers , yet the movies are enjoyable.  Maybe space as a location is exempt from my hit / miss ratio theory.  I’d actually love to make an entire website based on this theory but that’d require seeing every movie I’ve ever hated again and well … fuck that.

My epiphany by the way was this :  “you’re wasting your life watching this shit day after day , go challenge yourself.”

Because sitting around waiting for a great movie to be released … like Memento for example … one that takes brains to watch ( good luck with that re-release , you’ll have to put subtitles)  ain’t gonna happen.  I even tried to sit through Jackie as it’s an academy award nominee and fuck me if that isn’t the most boring piece of shit I’ve had to sit through in a year.

So guess what I’m doing now?

I’ve enrolled in full time German language study.  By full time I don’t mean hiring a tutor to come teach me for an hour a day , I mean an actual year long 6 hours a day immersion in the language.  Why German?  Well you take what’s available.  Thailand has become little Germany so the language is available everywhere.  Hey had Iranians invaded Pattaya the way the Germans have, I’d be studying Farsi now , but they didn’t , so German it is.

Will it be hard to learn?  I sure as hell hope so.  I’m dying to put my brain back to good use and challenge myself at something.  The worst I do is fail , at best , I can order anything I want in Pattaya next year.

What does this mean for you guys?  Only that the first session of the evening will start at or around 7pm instead of 5pm as I had been doing the past few years.  Second sessions would begin around 9:30 pm.

When do I start?  Tomorrow.  I don’t believe in wasting any more time.