This week started off last Sunday with great anticipation for Wael’s twice delayed court date to settle her three years of Bankruptcy and in preparation for what I thought was going to be a nice little celebration I bought a bottle of champagne for the two of us.

Premonitions is a touchy subject , mention it too much and you begin to sound like a whacko , harp on it and nobody takes you seriously.  I just got the feeling though sitting there on the BTS heading over to her condo that something wasn’t quite right in the air.  Truthfully, I thought it was my own personal mental mindset that was making me feel like that as I too haven’t been in the best of places in my mind recently , ever since my birthday I’ve been somewhat out of sorts.

I chose only to do two sessions last week with two people I know I had a good rapport with and the time together went brilliantly as expected.  Since last Sunday the only person I’ve talked to other than those two gentlemen was my personal fitness trainer , instead I’ve shut myself into my condo and have been binge watching the teen drama series The Vampire Diaries and it’s spin off The Originals.  It was last Saturday in fact , exactly a week ago that I abruptly rushed three of my girlfriends out of my condo when neither of the trio could grasp the not-too-hard-to-understand ending of Kevin Spacey’s American Beauty.

Fuck, fuck and fuck – were my mental replies.  God forbid I try to show them Memento or something similarly obtuse.  I’m fucking sick of having to play movies made for brain dead people like Bring it On , mindless Hollywood flicks that appeal to the lowest common denominator of societies misfits.  Yet the last time I had them over that’s what they all stood up and cheered for and yup – all ended up crying for at the end.  So that was the last time I ever invite mental midget country folk to my condo, never again.

But I did find comfort in a couple of great movies I connected with , the best of which was Lost in Translation.  If you really want to understand my life and how I feel please go watch that flick and relate yourself to Scarlett Johansson.  If you do go watch it , or perhaps you’ve seen it and are recalling it from memory , let me call to your attention just how alienated both she and Bill Murray felt trying to fit in with Japanese people and culture.  The movie went out of it’s way and did a very good job of making Tokyo seem like the last place on earth you’d ever want choose to try and fit in somewhere.  That’s how I feel here, in my “own” country.  Quotes included because the only reason this is “my” country is because I was born here , I have absolutely nothing in common with Thai folk.  Nothing at all.

It’s why I choose to shut myself in every day.  I don’t want to know Thai people, I don’t want to see them, I don’t want to smell them, and I most certainly don’t want to interact with them.  On the sidewalk three days ago I charged like an American football player through an offensive line of fat chicks that took up the entire width of the walking space allotted as they waddled together oblivious to the dozens behind them being slowed to a snail’s march.  I whip turned on my heels right after I had done so and snarled at the fattest of the woman who I’d knocked to her knees and lashed out to her in Thai screaming at her that she doesn’t own the sidewalk.  A crass move perhaps , but it was deserved.  I have neither the time nor the patience for anyone who gets in my way.  Fuck ’em all to hell.

So there I was in the BTS with my head hung and shoulders slouched thinking it was my own malaise that was giving my stomach this sense of uneasiness.

I stopped by the Auntie Anne pretzel shop at On Nut to pick up Mistress Wael’s favorite salty twisty and normally that brings an instant smile to her always happy face but the second I opened the door to her place I could see her face was in a very bad place and no pretzel was going to snap her out of it.

If you don’t already know, she comes from outside Chiang Rai , about thirty or so kilometres in the country side,  very near the cave where thirteen children , barely teenagers , have been stranded deep inside , a labyrinth that has been mostly submerged in water brought on by the monsoon rains of the rainy season here.  On the most rural of side streets , there’s only three houses on the path to Wael’s home – one of which is currently missing a child of age thirteen , one who shares the school bus with her daughter every day – every day that is except the 7 days this week brought. 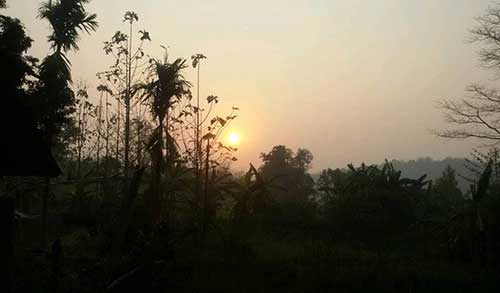 There I stood with champagne in one hand and a pretzel in the other reading the face of someone who looked distraught beyond words.  You know sometimes in your life there are moments where you are reaffirmed that you should always trust your sixth sense ? – that was one of those moments for me.  That was seven days ago, word had just gotten out about the missing football team so things were just concerning at the time.  More on her mind was the twice delayed court appearance where her three years Bankruptcy status was to come to an end.  I had asked her if she wanted me to go with her to give her strength as it necessitated that she be in the presence of her woefully inadequate ex husband , he the man who had beaten and tortured Wael years prior.

On the Monday the court passed judgement that her travel status could be reinstated and that she could apply for and receive a passport again, thankfully.  But her ex refused to offer any compensation package to the bank that held the forfeited mortgage , and thus the bankruptcy was extended a further 10 years for her , unless she wanted solely to pay back a good portion of the million owed.

The ten years was her breaking point with him.  She broke her ring on his nose , shattered it in two , it must have been one hell of a punch – I wish I was there to see it.

I told her to pay no attention to the 10 years , simply tip toe through the cracks of society like I do , life goes on as normal.  Continue saving for a condo , buy it flat out in cash under my name and let me transfer it back to her when the time does eventually expire.

It was great to see her anger preside over her sorrow , like I said many times before – being a mistress changes one’s confidence , greatly so in fact.  She took my advice with a nod of the head and an all English reply of “ya fuck him , that’s how I will win him.”  Of course she meant, ‘win from him” or even better “defeat him” but hey she’s still learning the language.

So with that behind us I didn’t end up seeing her until earlier tonight.

Ever had that moment where the filter between your brain and your mouth was temporarily turned off at the most inopportune time?

I’ve now had two such moments in my life, one just as inexcusable as the other but I didn’t think I could actually top my first mouth blurt.  I was wrong.

The first mouth fart came at the end of an Italian funeral , an event which had me experience my first limousine ride on the trip to the cemetery three cars behind the hearse.  Come the end of the night as I was leaving the house of my long ago boyfriend his mother said simply “thank you for coming” and with my mind on the limo ride can you believe my reply was to say “thank you for inviting me, it was fun.”

I could see the word floating from my mouth to her ear as time slowed right after I said it but it was out of hand’s reach and all I could do was calculate the severity of the facial reaction once she processed what I had just said.

Bad as that was , tonight Wael – on the eve of the seventh day those boys have been missing – remarked that the boy on her street could survive because he had always been very strong.

Again , without filter I simply said the first thing that came to my mind, “I wouldn’t want to be strong if I was in that situation.”

“Why?” she asked totally not getting my line of thinking.

“Because being the strongest just means you are left the only one eventually standing as every one dies around you” – thinking back to a story from a survivor from the USS Indianapolis where he cursed his strength as he floated alone in the ocean the last couple of days of his ordeal, long since left in solitude by his not so fortunate crew mates.

Once my eyes stopped gazing up to the top right where I usually stare when recollecting a memory I realised the horror of what I just said.  Whereas the ‘fun’ comment was misplaced , this one was paralysing.  Seven days in a pitch black cave as a thirteen year old is bad enough, to endure that possibly alone surrounded by the dead bodies of your best friends is unimaginable.

So there we are , it’s been not the greatest of weeks, save the two sessions I did which were remarkable , yet forgettable given the more pressing matters at hand.

I cancelled my sessions today , again , sorry about that.  Lemme sit down and answer the as of yet unread emails tonight and we’ll get back to doing sessions , her and I both, tomorrow –  ok guys.