Huddled together , furtive and vulnerable , like a rat in a maze.

From the furthest corner of the lifeless room , I take count of the brainless denziens which surround me.

Careful never to make eye contact I shrivel myself into nothingness and pleasently seem to make myself disappear.

Yet my ears exist and there is no escape from the meaningless ramblings of the crazed prophet whose hideous voice is amplified a million fold by the dildo-ous looking microphone gripped in his hand.

His singular purpose , to rob these swine of their will so that they will grow ever more ignorant , if such a thing were possible.

An inner voice laughs manaically to myself.

For while their lives are forever lost , my holy grail of salvation lays there … only four days away.

My escape from this special hell is imminent … if only I can survive until Thursday. 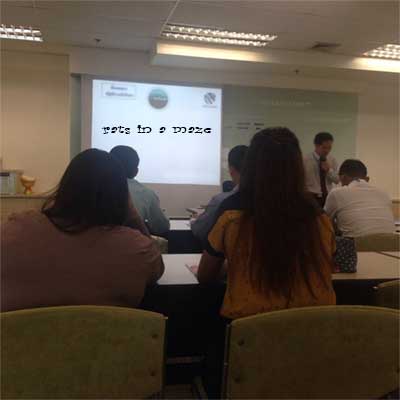 And survive I did for it is Thursday afternoon and the holy grail of which I spoke … my one year multi entry Schengen visa … is stamped in my passport anew.

So what blood ritual did I have to endure to get this wonderous visa you ask?

Why I just had to survive four – ten hour days of Corporate Insurance Seminars in a room where the only thing that sucked the will to live out of me more than the endless parade of speakers were the poisoned green fluorescent light above me which flickered incestantly throughout the week.

Let me tell you , there’s a special hell for people who recline their seats on airplanes , but there is a deeper hell reserved only for people who have sold their souls to working in the insurance industry.

Luckily my ‘special’ arrangement stipulates that I must endure these days of aural oral torture three times per year at most … the last of which for this year just thankfully ended a few hours ago.

In return , I get payslips for what looks like a full time job , and that my friends is the golden egg which allows me to march into any embassy and successfully apply for admission to their country.

I don’t get any money for the arrangement … that goes to the man who actually has to claim that life as his job … but because of his deal with me can claim he’s in fact unemployed and thus escape alimony responsibilities.

Ya , it’s a fucked up world , but you do what you gotta do and step on whomever you have to step on to climb the ladder out of hell.

It never ceases to amaze me how far I can get in this country with a twisted proposal , a bag full of cash , and an eager participant who like me has agreed long ago to swim with the currents of corruption and not against.

Gotta say though, walking into a corporate event and acting like I’m an actual employee is no easy feat.

The “who the fuck are you?” stares begin immediately and at times I feel like I”m “this close” to being called out like the girl at the end of Invasion of the Body Snatchers …

But survive I did … somehow.  Though I do feel as though my soul got eaten a bit.

Anyways, the strange thing is that once it’s over I rejoice at being able to slip back into my Mistress personality , having had a peak at Pandora’s Box … a life that “could have been” back when working Insurance was briefly my first ever job after returning from Australia.

“That could have been me” was the thought that passed through my mind every single day I was there.

On the second day there , that’d be Tuesday, the keynote speaker kept amusingly saying (and in English to boot) “Knowledge is Power”

Every time he’d circle back to it I wondered aloud if he had in fact just blatently plagurized the line from Lord Balish himself as it’s from season one’s Game of Thrones.

I said it was amusing to me because just as Lord Balish mistakenly defined what true power was , I realized …sitting there … that to him I’m in fact Queen Cercei …

Power is indeed , power, and I bow to no man. Nor will I ever.

That tonight , while those poor 500 or so souls are still listening to the ‘knowledge is power’ guy speak … I’ll be sipping wine from a chalice whilst a young 23 year old man grovels at my feet for two hours and pays me for the priviledge to do so.

When that moment comes , I won’t be reminiscing about any GofT dialogue to pair with the situation.  Rather, I expect my thoughts will align more truly with William Wallace’s last word ….

So, with my whip held firmly in my left hand and the visa in my right , come December 20th I’m Europe bound once again.

This time my journey takes me first to the Swiss mountains and then beyond … to the land known throughout the world for it’s comedy … Germany !

From January 7th onward , those who wish to serve at their Mistress’s feet in your own backyard can do so.

Let it be known that there are 3 Mistress’s Boyfriend sessions lined up which takes me from Zurich up through Stuttgart and on into Düsseldorf thereafter.

Remember that my flight home has to be a shared expense and presently there are 3 booked sessions sharing the cost.

Which of course will be halved and halved again as the number of sessions grows until it becomes a paltry amount.

Or .. one of you can pick up the tab for the rest and proudly pronounce your perfect pedigree amongst my army of men.

I’ll leave that up to y’all.

Mistress Wael is heading back to Singapore in the very near future , possible as soon as next week.

Once we have a third booking for her (we currently have two) we’ll make the dates of the trip public on the blog.

… and on the Fees page which … yes I’m forever working on updating it must seem to you … but will have a new look as will the gallery quite soon.

So if you wish to see Mistress Wael for either a session (2 hours) or as a Mistress’s Boyfriend  in Singapore, hit us up via Email or send a session request in to her.

What else?  Ah yes, my 500 Tinder dates story is almost finished, as is Wael’s Tease & Denial Secrets story … and they’ll be up later today or tomorrow on the blog.

Next week from the 10th to the 15th of November I’m heading out for another Mistress Girlfriend Experience trip and since Saturday the 16th is fully booked the first date you can book me for a session next week is actually the Sunday.

After which I’ll be staying home doing sessions right up until the European trip which has me flying off to Switzerland on December 20th.

One last thing, on Twitter recently I asked for one of you nice boys to bring me a couple of chastity devices and that’s been taken care of so no need to bring more.

So if you’d like to be rewarded in session for bringing me either one of those toys or something of your own idea , let me know what you’ll be bringing me so I can mark you in the VIP color in my emails.

That’s all I got for ya.  Hands off your dicks!