Boot Worship has never been an option for me … curse these tiny feet of mine !!!

Back in the early days I was using a lot of the former Mistress Jaa’s clothes , accessories , and even boots for boot worship even though she is a good 3-4 sizes larger than me.  That’s more of an indictment on how small I am than it is me ostensibly calling her a whale.  Jaa has the body type where you looked at her and instantly would think “ok i’m not gonna fuck with this chick whatsoever” whereas I’m like a Chihuahua dog that’ll bite your balls off if you take me as a push over.  Us small dogs come with a big bite …

On one of the first boot worship sessions where I was asked to make this slave lick , suck and worship a pair of knee high powerful looking boots I figured I’d give Jaa’s boots a try for once.

The boot worship session was a disaster , I met the guy at the door and instantly barked at him to get down on his knees and start cleaning the under soles of her boots – which went fine.

“Now follow me to my bedroom” I remember telling him after his first five minutes of boot worship- then I took my first step and my tiny feet went for a ski down to the head of the boot causing me to careen forward.  I brought up my left foot to compensate but when those toes went for a similar ski I wobbled for a bit , then my knees buckled and my ankles folded over like a suitcase being shut.  My head whacked into the wall and I crumbled to the marble tiled floor like an At-At Walker.

Though I wasn’t actually knocked unconscious it did take me a moment to recover so I’d say the total time I was all Humpty-Dumpty like on the floor there was about a good 15 seconds.  So when I glanced back over my shoulder and saw the dude was still on his knees – concerned more about the boots than I was – I was pissed off enough to get some swift retribution by swiftly thrusting the long spiky part of her boot into his scrotum.  I do believe that was my first time hoofing a guys nuts too.

Point is , boot worship sessions while swimming in her boots just wasn’t a viable option so I went shopping a few times to find a suitable pair.  Now in case you’re not on top of world wide weather trends , Bangkok is a fucking sweat box , it’s 40C here every damn day and knee high boots don’t sell very well surprisingly enough.  I guess other girls haven’t yet realized how profitable boot worship can be – especially after a day’s shopping when they’d have a smelly pair of boot cooked – sweaty wet feet whereas I have on countless occasions already wiped my post jogging feet clean on a guys tongue like its a washing board.

I wasn’t about to go to the designer stores and scoop up a pair of costly boots , the boot worship niche is too small to warrant such a purchase.  Until last weekend when I got this Godfather like offer that I couldn’t refuse :

Strike while the iron is hot I say , so I took him up on his offer immediately.  Now I knew from many past shopping excursions that my popular haunts like Pratunam , MBK , and all the night markets are devoid of any boots of quality , and certainly not in my size.  So the only place to go was either Paragon or Emquartier , and since the Em is just one BTS stop down the street at Phrom Phong , that’s where I told him we’d meet up.

I grabbed his hand and led him into Emquartier – the new Emporium which is a place that I really have never stopped to check out , mostly since it’s just a place Thai’s go so they can make public their location on their Facebook status page , ya we’re that vain.

So after browsing through a few stores that were much adieu about nothing we finally happened upon a great little shop featuring an assorted collection of swank boots , that of a mistress type ilk.  My twitchy little fingers ran across a few pairs of great looking boots before my eyes lustfully befell upon a pair that summarized all my Mistress dreams.  The store clerk , a big bent grey and old dude who could have very well been my country’s only cowboy helped me into the boots I so coveted.

They fit perfectly.  Indeed I looked totally bad-ass in them , men would grovel at my toe if I brought these home so I turned to my slave-for-a-day submissive pet and ordered him to buy them for me.

My foot slave turned a dark shade of purple , he definitely forgot to exhale for a good sixty seconds.

He blew his cheeks up like a blowfish and exhaled forcefully as if to relieve a thousand years of pent up stress in that single moment.  See that’s quite a dilemma for a dedicated foot slave to be in.  You’ve offered to take your Mistress shopping , you’ve pledged yourself to her happiness, yet such happiness comes at this moment with a very steep price, one obviously far beyond what his level of comfort with the word happiness entailed. 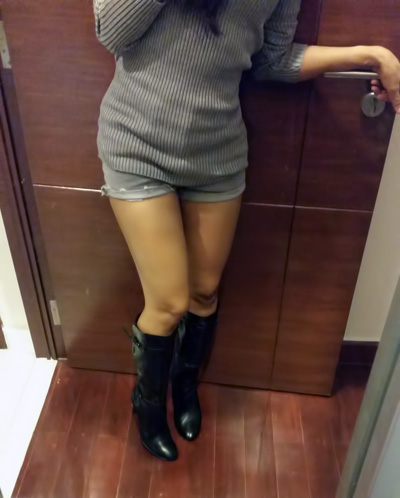 I had every intention at that moment to rub the soles of my boots across his mouth right in front of Thai Jack Palance , to make his watery mouth forget the thinness of his wallet , but in the end I’m nice to a fault , too nice for what I do.   So I let him off the hook.

“It’s too much , let’s go find something cheaper” I said and I think at that moment he fell in love with me.  Either that or he was recovering from a standing heart-attack and I was mistaking love-struck eyes for ones that had just seen death.

7,500 baht was the cost of the boots I settled on eventually.  Yes fine, they may not be Jack Palance approved , but good enough for a small time cowgirl like me.  So get on your knees men and start licking.

Because I crap bigger than you.