I acknowledge that I can be a bit of a cunt from time to time when answering emails , but if you were forced to read half the dribble that comes out of men’s minds which I am forced to read, well, I’m sure you would cut me some slack.

Today, or tonight rather , see – I’m tired as fuck …  I’ve been learning to drive all day and tomorrow – knock on wood – I finally get my drivers licence and thus can cross off another thing from my list of “things I need to accomplish before I’m 30”.  Winning the Nobel Peace Award for writing is on that list as well so I better get my ass in gear and finish one of the two novellas I’ve started.

So with a glass of red Bordeaux in hand I collapsed into my sofa here to see how many emails I can knock off before I doze off to sleep and I happened upon this one first.

At first I laughed upon seeing the sender had self addressed himself as “Sir” as I thought of the few people I know who carry such an honorific title like Sir Alex Ferguson or Sir Sean Connery.

Sean Connery, Famous Titles, and the sender’s name being Alex all clashed in my mind and the following burst of laughter shot some Bordeaux out my nose.

I read on, and at the end I had my tongue stuck firmly against my right cheek as I always do when contemplating how to respond to a less than inspiring email.

Wanting to sleep, I’ve since downed the entire glass in one flail swig , replied as such , and now I bid you adieu.

Oh and , yes I realize that Welcome has two L’s in German (willkommen) 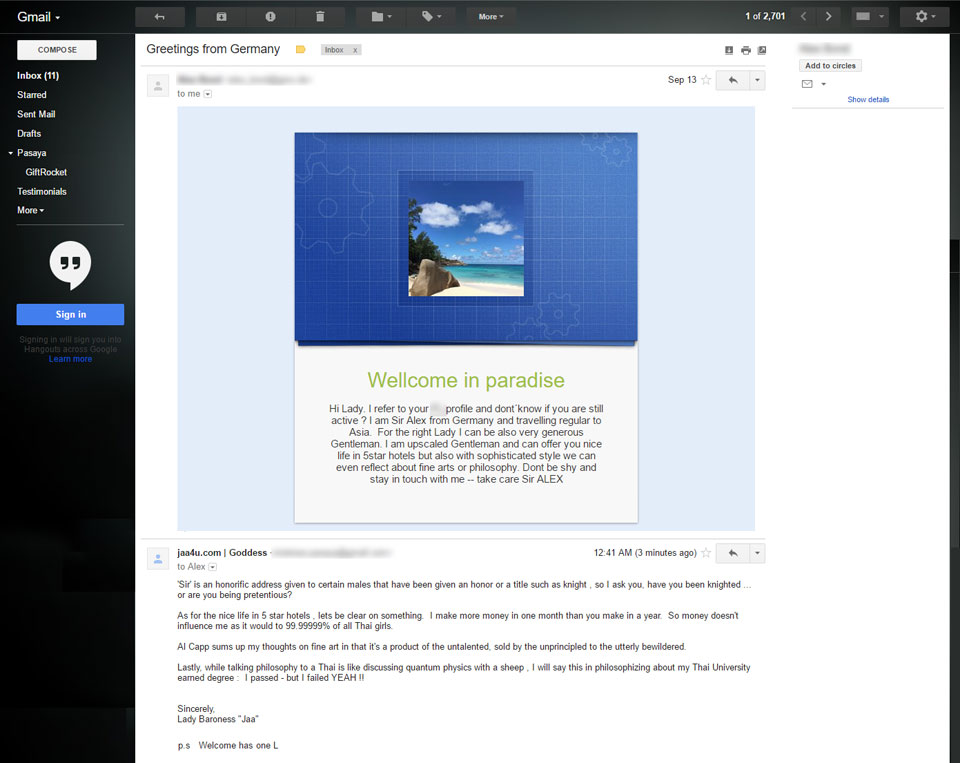