I wouldn’t know because I don’t suck them,  but going by the sheer demand of guys looking for a  forced bi session I’m guessing cock is a delicacy.

Whether or not that’s true can be up for debate…  but for now,  let’s be real.

There’s nothing forced at all about a forced bi session.

So this notion in your mind that I somehow am going to drag you by your hair into my bedroom and lean your head over the edge of my bed while one of my harem of studs I have hiding in the closet is paraded out over top of you to have his dick slam deep into your throat while you kick and struggle on the mattress is a hoax.

It’s like asking a cat to kick and meow violently as I push him toward a warm saucer of milk.

The truth of the matter is that cat is going to be lapping up the milk with reckless abandon the same way you guys are going to be swallowing that hot dog like it’s the last one left in the world.

Thus,  a deterrent is needed. 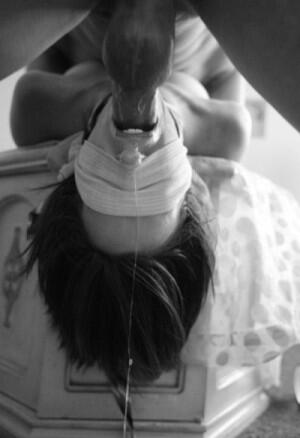 That’s why,  starting back a few months ago,  I stopped trying to look for the youngest cutest most passible ladyboys in Bangkok to come and service your mouth.

Instead,  I’ve been introducing guys…  after they’ve been tightly bound and gagged of course…  to Chuck the ladyboy.  And let’s be frank …  there’s really not much “lady” in ladyboy when it comes to Chuck lol.

I wouldn’t even call what  she has between her legs a cock.   I more or less would call it a piston…  or perhaps…  a ramming device… the kind they used to break down Castle doors in the Medieval era.

Or breaking open throats… As it were.  lol

In fact the reason I decided to sit down and write this little story about Chuck the throat wrecker is because I received my third consecutive email this morning from slaves who experienced Chuck earlier this week…  and still cannot eat  solid food.

Forced bi with me means you’re going to gain a few kilos  the week following your session…  because it’s nothing but milkshake city  thereafter.

It truly takes about 4 to 5 days for my slaves throat to contract back to its original state.   swallowing feels weird.   talking feels weird.  it’s like having this very wide chasm between your mouth and your stomach.

It might not be the best business decision in the world to conduct my forced bi  sessions like this.

Unlike my legendary seductive tease and denial sessions where you guys come back again and again…  there  has never been a repeat customer for my version  of a forced bi session.

Nor do I think there ever will be.

But come on give me credit… I found a way to extract the most “force”  out of a forced bi  session.