In VOOM 8!!!!!!!! I wanted to get back to using my face sitting chair, with a higher camera angle so that we are looking down at my slave from the very corner of the chair.

For this clip I wanted to show how Trampling with the sharp stilettos on my knee high leather boots can force the slave’s throat to open when he yelps.

That causes the poo that has made his throat , cheeks and mouth bulge – slide down lower every time he yelps in pain from my boot sinking into his nipple.

I thought that was going to be the feature of VOOM 8!!!!!!!! but by accident something else made the video accidentally wonderful.

You see, I didn’t feel the need to poo even once in the four days before shooting yesterday.  But I kept eating and eating because I had 2 Human Toilet Training sessions on my calendar that ended up postponing until next week.

So yesterday when I had to poo … it was 4 days worth of poo going into his mouth.

But it wasn’t that he had never tried to swallow so much at once that made the video great.

What made the video great is that my poo was super sticky.  Like crazy glue.  It got stuck 1 inch thick on the roof of my slave’s mouth, and under his tongue and on the walls of his cheeks.

Worst place for my poo to get stuck for him was at the bottom of his throat.  Imagine having brown awful tasting crazy glue way past your gag line. 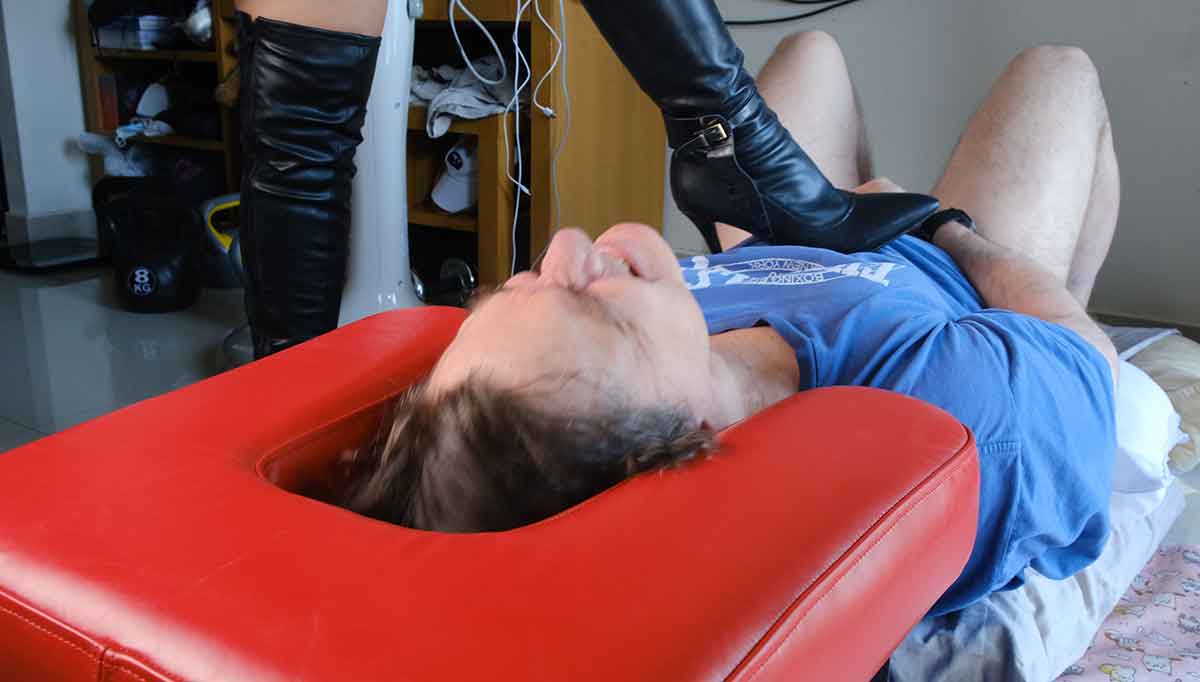 The start of the video has me trampling him.

I’m training him to yelp all he wants when I dig my boot into his body.  At the same time, I am finding the spots that make him yelp the loudest.

In this case it was his left kidney area and his left nipple.  His right nipple, not so much.  He is left side sensitive.  It is important to find the weak points of all my slaves before trying to extract all their fear and panic.

Now I could face slap him for yelping without permission.  But I want him to think it is allowed.  I want him to yelp with his mouth wide open.  It is very important he does it every time I press down on a weak spot of his.

This is foreshadowing.  Just like they do in Hollywood movies.  It’s a trap basically. 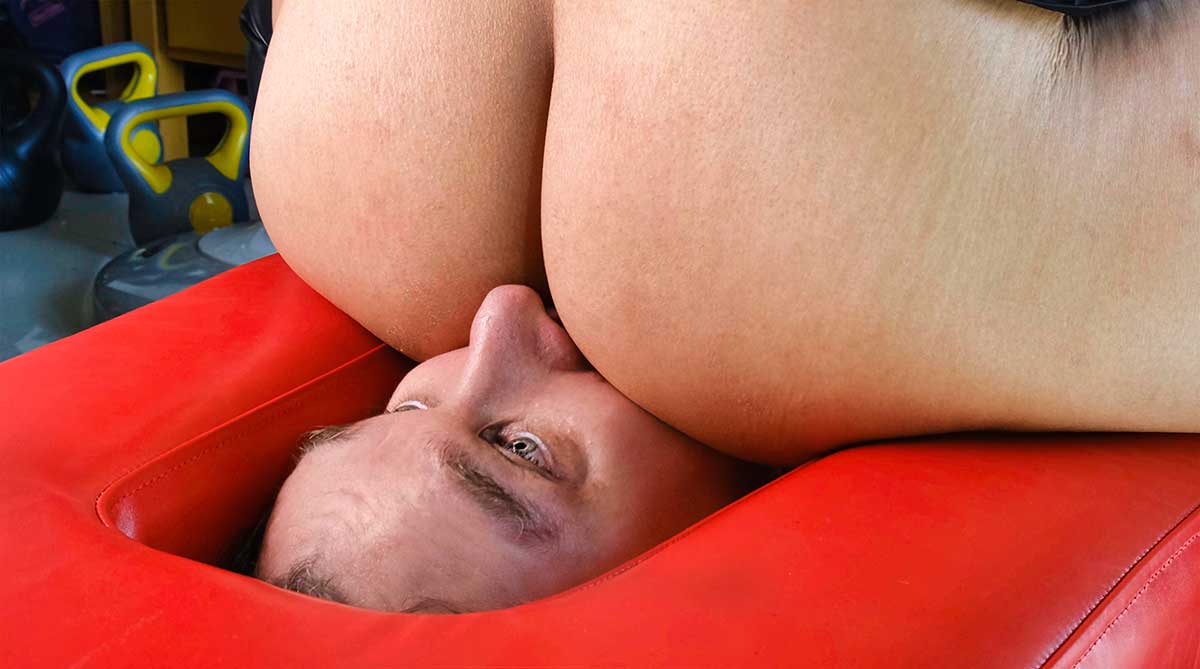 I didn’t have a chance to face sit him for this video.  And so I was very worried the clip was going to be too short.

The poo was coming out as soon as I sat on his face.  Honesty – it wanted to come out when I was trampling him but I managed to hold it in for those 2 minutes.

Now my slave is used to me taking forever to feed him.

If you go back to VOOM 3 or any of my other toilet training videos on Yezzclips you will hear me say “coming, coming” which is my warning word, but I had to say it many many times.

Back then I wasn’t comfortable or relaxed enough to feed slaves my shit.  I had to focus.  Now it just comes out with the VOOM! force that I need it to come out with.

So when I sat on his face and my asshole opened right away I could hear by his breathing he was already scared.  Something was different and he could sense it.

This time I didn’t eat any fiber drink for the shoot.  Fiber drinks make sure my poo has a lot of water and is very loose.  That way it comes out with explosive force.  Which is why I call the videos VOOM! in the first place.  The force.

When the first load came out like sticky porridge and blocked his airway I got the look of panic in his eye that I love to see.

This was the most panicked I have ever seen his eyes.  Or any slaves eyes.  I love that look of fear.  When I watch what I shot for the first time I am not looking at my ass or how I fed the slave, I am looking at the fear in his eyes.

When he swallowed it wasn’t easy for him.  There was no natural water to wash it down.  And when it kept coming and coming he had no idea how to deal with so much of my poo at once. 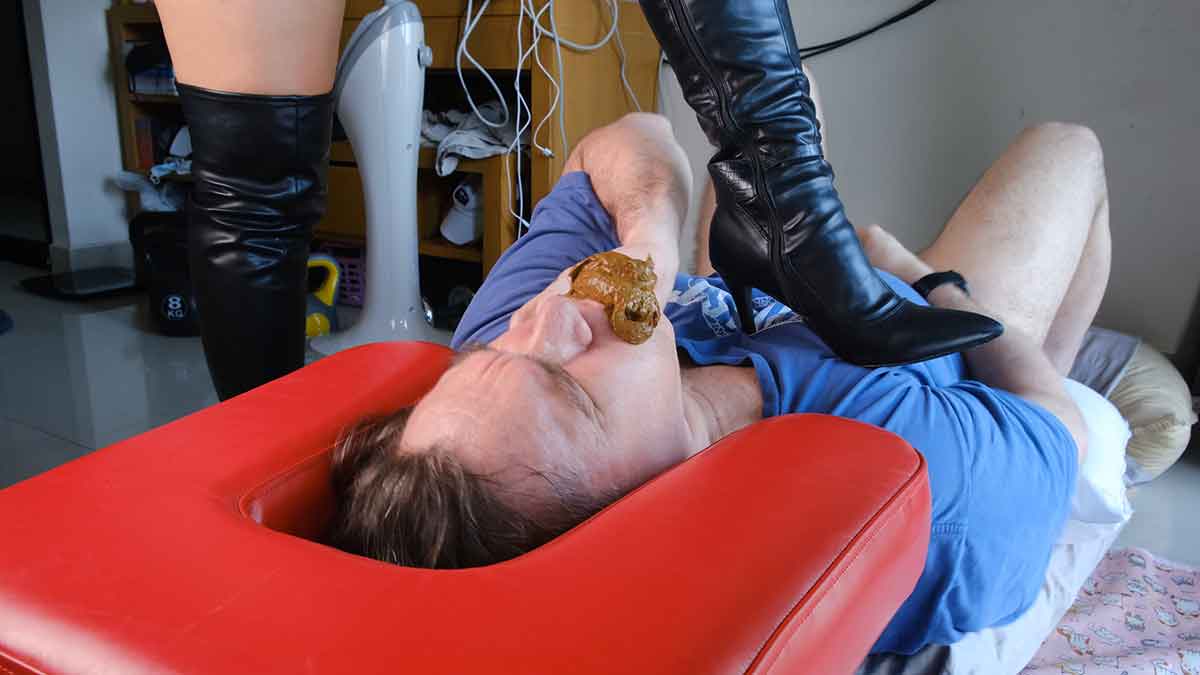 Trampling to Make him Swallow

The next part of the video has me going back to trampling him.  This time to make him yelp and swallow bits of my poo each time.

But you can see that after his first time yelping he learned that making a noise is going to cause him to forcefully swallow.

So then he tried to stay quiet.  He waved his arms a lot whenever he wanted to yelp out loud.

At one point the poo on the left side of his face was sliding down his cheeks towards the back of his neck.

I didn’t want to have to clean the chair so I grabbed his hand and told him to cup and hold the poo sliding down the left side of his face.

Him holding his face like that reminded me of Steve Buscemi holding his head after he got shot in the side of his face, I think it was the movie Fargo.

Remember that, because I have a funny story about his face. 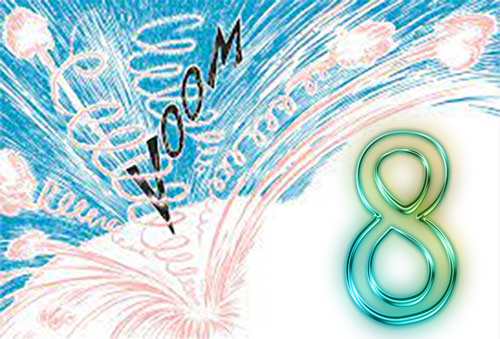 I had left the camera running because I was more worried about him dropping poo on my floor as he waddled to the bathroom.

When he got in the shower he was having a tough time.  He realized that my shower head didn’t produce a strong enough stream of water to loosen the sticky shit that was stuck to the inside of his mouth.

Then he grabbed the bum spray that I use to clean my pussy and ass.  It has a harder spray.  But when he first sprayed it into his mouth he realized the spray pushed the shit violently down his throat.

That’s when you hear him start to gag uncontrollably.

I laughed.  You had to see him.  If you did you would have laughed too.  He was a naked guy who was in panic mode because he had no way of getting all my caked shit out of his mouth.

He looked like a cat in a dryer.  He kept spinning around and around.  Trying to aim the shower head spray to different parts of his mouth.  The more he did the more he puked and the more I laughed.

But then he grabbed one of the guest tooth brushes that I keep in the shower and do you know what he did with it?

He tried to stick it down past his gag line and started to brush his throat!!  I thought he was going to swallow the toothbrush.  He had hold of it with both hands.  Like he was holding the plunger for my toilet.

The more he brushed, the more came loose and the louder he would vomit.  Again, the louder I would laugh.

It’s all on video, you can hear it at least.

Gosh, I love making slaves go through hell like that.  Because you see, toilet slavery should be something to be endured.  It should have its awful moments.

But I think it is those awful moments that slaves remember the most afterwards.

This is the only VOOM video that has shit coming out of the mouth and he didn’t swallow the whole load.

But the ass to mouth to stomach seal was made by him and he did attempt to eat it all in one shot.

The poo was just too sticky though.  I’ll have to remember to always take my fiber drink a few hours before shooting, if it is to be a VOOM video.

The trampling worked as planned.  I will do that more often now.

It was too much for his dick I think, it went soft.  So that is something I will have to try on different slaves to see if it is possible to maintain an erection through extreme trampling and extreme poo eating.

You can buy VOOM 8!!!!!!!! and all my other videos on my YezzClips store or my FemScat store.  The first is in Euros, the second in $USD, so take your choice.

For my next idea, because my FemScat store has a lot more solo pooing, I want to study lighting techniques to make a really pretty, sexy and hot video of me pooing by myself.

I’m looking to shoot as the sun comes up in the early morning.  I want that orange sunrise with the darker shadows in my room look and feel to it.

I’ll have to buy a white sheet and have a seamstress put metal holes and hooks in it so I can block the condo across from having a view into my balcony door where I want to shoot it.

Also, that white sheet should make the light look softer.  So I’ll go get that done today.  Then give my tummy 3 or 4 days to explode again and I should have the world’s sexiest self-shitting video by next week.

Shot in 4k of course.

Hope you liked VOOM 8.  I’ll be writing and posting the next two Human Toilet Slavery stories in my series today.  Merry Christmas 🙂

Looking to book a session?  You can either email us – which we MUCH prefer you do as normally people tend to express themselves more when they write an email to us :