How can one learn Thai in 20 minutes , really?

Well , because the guy who created the language was the same guy who named our capital city after what us girls love to do with a hot guy after a few drinks.  No, I jest.  The reason is ,  if you can get yourself to think like you’re so remarkably stoned – to the point where you can barely put together 20 words of the language you speak – then that’s all you need to be fluent in Thai.

And I can get you there in 20 minutes.  No not by feeding you mushroom cookies like they’re M&M’s , but by comparing how easy Thai is to this unnecessarily complicated language I’m learning right now called German.

I swear , back in Old Saxon  in the 8th century there must have been a group of High German writers who though they wanted their works to be understood by as many readers as possible decided it’d be better to create a language that for starters sounds like two cats and a typewriter covered in tin foil being thrown down a rather large set of stairs.

24/30 on my first German exam. You wouldn’t believe how hard I studied for that 90 minutes of hell. pic.twitter.com/EPcZ6DYJOR

Then , as they sat down in their field of cannabis ,  as I understand it – one of the first things they did was to translate the Bible into what was known as Meißner Deutsch.  So no doubt they came across the story of Noah and the Ark – and I’ll bet you that while they were higher than giraffe pussy , they read that story and said “fuck, how did Noah determine if the two mosquitoes were male or female?”

Can’t have that kind of confusion about so they said ….  “Let’s make every word in the world masculine or feminine.”

Then as they sat around nodding wondering if that was enough , one of them said “fuck no.”

“Let’s make the words like marriage … where you have to agree with everything.”

So now this pronoun has to agree with that pronoun but is spelled differently if it’s singular or plural or referring to you instead of him or I.   And so on.  And so on.  Fuck that.

There must be an easier language to learn than this right?

Well there is, it’s called Thai , so without further adieu, please open your Thai for Germans 500 page text book to page 21 of the introduction and let us begin :

Rip it out.  Be gone vile thing.  We don’t give a shit whether a blade of grass has a dick or a pussy.  You know why?  Cuz we’re not fucking insane, that’s why.

Those tenses are represented by two words and two words only.

Past :  Laew.  (pronounced LOUD without the D at the end.)

So pretending the word GO is the same in Thai , to say :

I’m going , or any present variation of that :   Go

Rip those chapters out too.  Apple is Apple in Thai.  Banana is Banana – unless owned by a ladyboy in which case it may be present or un-present.

Ok so what do we have left of the book?  Well pretty much the vocabulary section and sentence structure and those are caveman basic to learn.

The rest you can learn if you wish , but with these 6 you can say anything you want in Thai.  If you learn up and down you also just learned “get on, get off, board, disembark” as well.

For vocabulary , it works like this.  Once you learn a word , you’ll find that it combines with other basic words to make all kinds of new words.  So for every word you take the effort to memorize , you learned 10 more as a bonus.

And you just learned how to say school bus.  Can you figure it out?  (Think how a caveman would describe the function of a school bus)

So once you throw out the many different variations of saying something , and you instead distill the thought down to its basic concept , you can then throw out all these sentences for example:

Where did you go?

Where did you come from?

Where have you been?

What have you been up to?

which all gets condensed down to it’s most basic description.  Can you guess it?

How would you answer :  “I went to go get the kids”  if I told you Kids = Luke as in Luke Skywalker.   Well there’s no “I”.  There’s no past tense of go.  There’s no definite article THE.  There’s no plural of kids.  The bare bones of that sentence , which is how we speak , thus becomes :

But what about the tones?  They’re so hard.  How many tones are there?  What do they sound like?  How long does it take to master the tones? 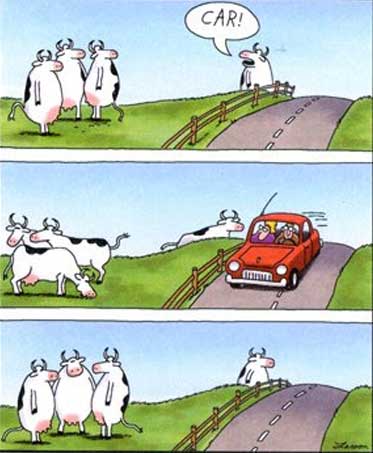 Why?  Well if you are an English speaker and I say to you :  “I live close Mariott Hotel but I stay inside because I not use to weather so hot.”  Can you figure out what I’m trying to say?  Ya of course you can , you know why?  You’re not stupid.  You’re brain has this remarkable ability to interpret my meaning and to change words on the fly until what I said makes sense.

Because we have 5 tones, one word like Cow – can have 5 meanings depending if you screamied “COW!”  like you saw the terrifying Cows in a Far Side Cartoon , or you saw one crossing the highway in front of your speeding car and you screamed at your wife “Watch the Cooooooow … bang!”

You say to the taxi driver in Thai while pointing at the small street upcoming on your left hand side :

Now to the taxi driver , depending on the “tone” you accidentally blurted out , you could be saying any of the following :

“Rice Beautiful Get The Hell Out Of The Way”

If the taxi driver has half a brain , which one of those do you think he’ll choose as your meaning?  Hmm, given the general IQ of the male population around here he’d probably choose “Rice beautiful get the hell out of the way” and flee from his taxi leaving you alone on the highway. 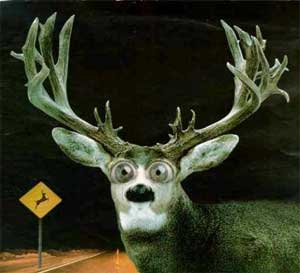 With a little luck though, he’d hang a left at the next street and you’d be home sweet home.

One caveat.  A great many Thais will be overcome with a paralyzing terror called “Foreigner Brain Freeze” where they’ll look at you like a deer caught in headlights and will simply blink at you endlessly even if you’ve spoken to them in perfect Thai.

There you have it.  You’re well on your way to being fluent.  Took you all of twenty minutes right?  Now if one of you guys can streamline this German for me so that I can be fluent in it today that’d be great.  I was up all last night studying for this first exam and it was worth it as I got 80% but geez, there’s another 10 months of it ahead of me.