It was a rainy Sunday morning if I recall correctly , I was nine years old at the time, and there I was huddled up with a blanket in the left corner of my small shoebox sized bedroom to get away from the water leaking in from the roof as it always did every rainstorm.

Dad was downstairs already yelling and screaming at my mom for one of the last times before he took off forever while outside of my tiny window sounds of my idiot neighbour slurring his drunken words were being drowned out by the 8am droning of the neighbourhood military like speakers strung high a top the telephone poles reminding us to ’embrace the poverty and find happiness in being poor’.

It was the speakers I hated most as a kid.  You couldn’t avoid the message of the ‘thought police’ every morning , 8am sharp. 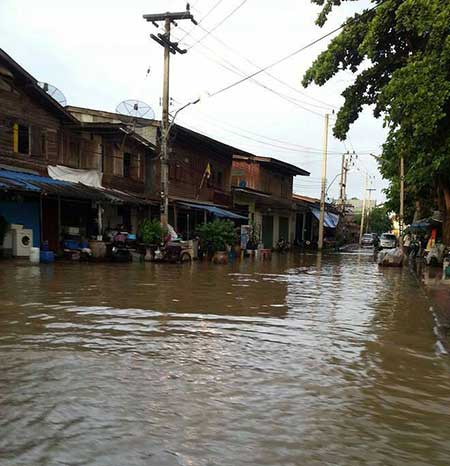 Oh sure the guy in the shack down at the end of the water logged soi speaking into the microphone would also remind us what day it was , what time the local medical clinic would open , and so on.

But sure enough , at the end of his long winded diatribe he’d go on endlessly reading from a prepared script basically telling us to willfully accept our lot in life.

One of the miracles of my childhood was that the people living on my soi had long since bribed the cable guy to hook the street up with basic cable television , and as part of my daily rebellion against the thought police I’d lay on the floor in front of my tiny tv pushing my nose almost right up to the screen so that the volume would somewhat drown out the obtrusive rhetoric from outside.

Every morning at 8am , for a while at least , Animal Planet would play a wonderful commercial that I’d sing along with out loud …

That song was more than my morning national anthum.

It was my motto for life , my inspiration if you will.

Every morning when the country would come to a halt and sing the anthum … I’d sing ‘Round ‘Round the World.

And why not?  That commercial had all my hopes and dream wrapped up in a one minute song.  I wanted nothing more than to go ’round ’round the world and not only see but do the things I saw glimpses of in that commercial. 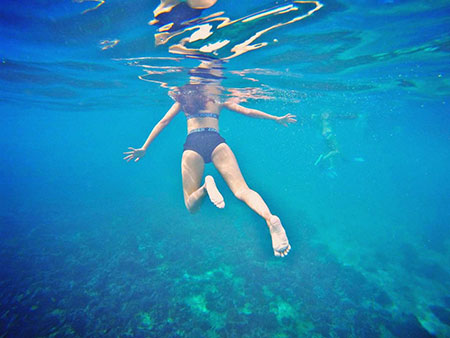 For instance, snorkelling.  There’s a brief shot of a couple diving along a coral reef.  I didn’t know the first thing about snorkelling or scuba diving at the time, but it inspired me so much that I couldn’t resist talking about it to anyone who’d listen that I would one day dive underwater like them.

Beside us lived this old hag , I saw her as somewhat of a witch , and god damn she hated me.  She’d sit outside her shanty holding her bamboo cane and every single time she’d reckon I was within hearing distance she’d look at me with that disgusted look on her face she always wore and would say “กบในกะลาครอบ”

It translates to English as : Frog underneath a coconut shell.

Basically it’s a petty insult thrown my way saying that I’m just a stupid little girl with no experience or knowledge of the world yet I think I’m wise.

To be clear, I never thought of myself as wise ,  i did however consider myself to be destined for somewhere or something else.

As we’re taught to not argue with those older than us we’d simply have the same conversation a million times.  I’d simply tell her “it’ll happen , I’m not meant for this kind of life” , and she’d respond by saying “you’ll die trying, and I’ll still be sitting here – laughing.”

Due to that ever repeating conversation , the merciless hag is 100 years old now and still refuses to die , just to spite me presumably.  That’s because every time I go home to see my mom  in her newly built modern home – raised high above the neighbourig hag’s abode so as to avoid the flood waters – I make sure to bark out the number of countries I’ve now seen.

Last time I was there I found her in the same rickety old chair and as she scowled over at me I said with a smile “24 !!  Schwein haben” and then I’d take a step closer to her and say it again , a little bit slower this time “schwein haben … means lucky pig … learned that in Germany … my 24th country”

That bitch can swear, I’ll give her that.

Every time I go home I set her foul mouth off like a bomb when I update her on the frog’s progress of worldly travels.

So as I sit here in the jacuzzi of my pricey Greek villa , sipping on a glass of white wine that my male servant has just poured for me – I think happily of  the profanity ridden rant that hag will go on when I soon tell her “den xéro tin típhla mou … & 26″ or literally , I’m blind and I don’t know anything.

Only thing that’s missing is a #footslave to come worship my toes here in this jacuzzi.

Imagine that, a frog that can speak a bit of Greek  (not to mention German, Italian, French and so on) … oh and can count too ….

And I’m not done yet.