Voom 1 and Voom 2  WERE the best human toilet training videos that I had made to date.

Until I made this one today.  This one is both the best and the sexiest.   I don’t have a name for it yet.  Maybe I’ll just call it “The Sexiest Human Toilet Training Video Ever Made” and I’ll explain why.

First the peeing on my slave part of the video.  Let’s talk about that.  There is all kinds of positions I can put my slave in to feed him.  There are machines I can buy.  He can be sitting up or laying down.  Whatever.   No position gives a more humiliating feeling than laying over a toilet waiting for me to use you.

If you have long hair you can feel it getting soaked in the toilet water below.  From that close to the water you can smell the inside of the toilet bowl.   And it’s a very uncomfortable position to get into and an even harder position to hold.

But what is amazing about putting a slave in that position is the head is tilted up.  Just like in the poo part of the video.  But I will get to that later.  Tilting the chin up does two things that my slave doesn’t even notice until it’s too late.

When I begin to piss , because his chin is tilted up , any piss that misses his mouth goes up his nose.  Even better – it doesn’t go up his nose and fall back out.  No , because his head is tilted backwards my piss goes all the way up the nose and empties into the back of his tongue and the upper part of his throat.  Then it mixes with the piss that actually went into his mouth.

Did you ever dive into a pool and have the water shoot up your nose?   It gets caught in your sinus and gives you a short sinus headache.  That’s what is happening to my slave in the video.  Only, he is getting a piss sinus headache haha.  I can tell you that after we finished shooting he complained of feeling piss inside his forehead and behind his eyes.  Is that possible?  I don’t know.  I just know that it feels great to see a slave feel his experience an hour after the session has ended.

The second thing tilting the head does is open the throat wide open.  When the chin is down and the slave tries to hold my piss in the very bottom of his throat he can do so for a very long time.  But with the head tilted back , gravity pulls the piss to the very bottom of the throat which causes a swallowing reflex.  So whether he likes it or not he is swallowing my piss uncontrollably.  That’s why you hear him gasp for breath , cough and gag. Combine that with my piss making his eyes water , his sinus cavity hurt , his nose burn and an acid feel in his throat and you can imagine the hell he is suffering below me.

When I’m done pissing I’m almost ready to shit as well but I have other things to do to him before preparing him to eat my poo.   I need to up the humiliation.

I like shitting into a mouth with glistening lipstick.  I don’t know why I just love it.  Feels more sexy to me.  For him it makes him feel I hope like his mouth is pretty enough to open up and swallow my poo which is coming soon.

Notice how well my slave is when its time to hover over him and feed him my shit.

All my slaves know to make a perfect ass to mouth seal.  But if they want to be risky and leave a gap then they know to chase my poo as it comes out.

Once all my shit is sitting in his mouth from the deepest part of his throat to a nice little mound around his lips I’m ready to let him eat it the way I like to see my slaves eat … by having it dissolve slowly until he has no choice but to swallow it gulp by gulp.

However.  I’m not done with the humiliation part yet.  Just letting him swallow would be too easy.   I’m not into easy.  I’m into making my slaves panic.  Pushing them beyond their limit at the time they absolutely do not wish to be pushed beyond their limit.  Understand?

And how to do that? 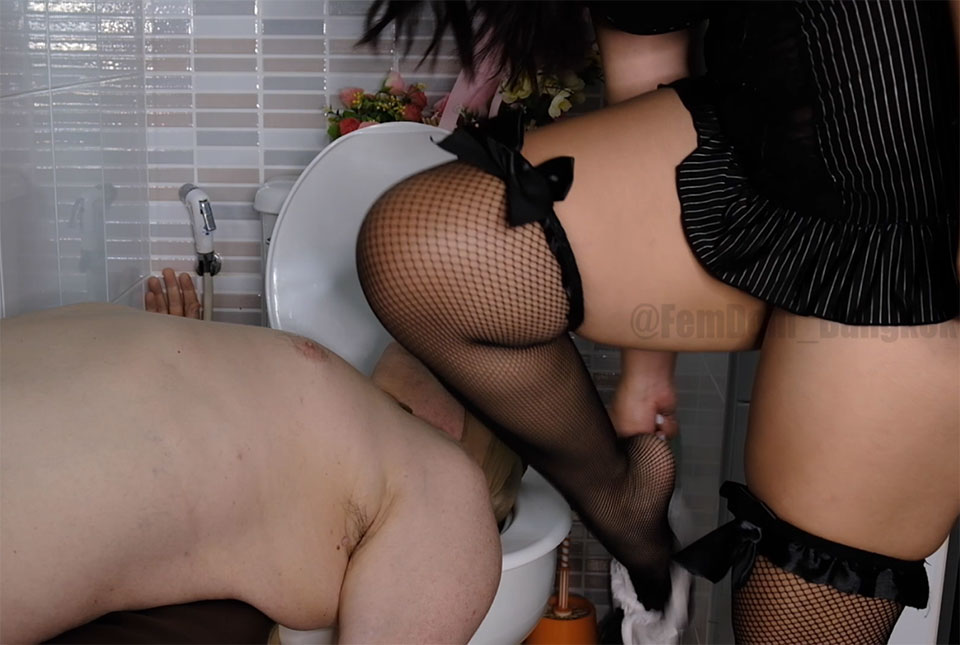 By going back to controlling his cock.

Then I take my time washing my hands , fixing my hair and doing things I normally do in the bathroom while he suffers below me.

I started the video with my black fishnet stocking on so that’s how I’ll finish … by putting them back on.   Slowly.   No rush.  Let him continue to suffer.

At this point in the video you will hear him swallow if you listen carefully.   With his cock limp and more and more shit melting and sliding into his throat his lack of horniness finally shows and he does what all slaves begin to do at that moment.

Wretch , choke, gag and smack the floor with their hands and feet.

No longer excited , the feeling of suffering and humiliation begins to build.   Which is exactly what I want.

I’ll just leave him there for a few hours like that as I go about my day.

Until I’m ready to use him again later in the evening. That’s why … this is the best Human Toilet Training Video ever made.

It’s every potential future human toilet’s fantasy and nightmare come true.  Both at the same time.

They’re terrified of it happening to them and yet.  They book me anyways.  They are compelled to try.

So?  There’s the form below you.   Go ahead.  You know you can’t resist.  I am the Mistress you have been looking for all your life and you know it.   The video proves it.

In fact, all my videos prove it.   See you soon toilet boy 🙂