Now I don’t  ever do nudes  ,  but I  had a few requests for some ‘ungodly hot’ photos that I was  going  to  send  privately and therefore to add  that  extra  level  of  “holy  shit”  to  my  photos I  decided  to  go  black partially seet through dinner dress without bra or panties.   But by the time Wael came up to  my ‘penthouse’ condo (tongue in cheek as it’s on the top floor with no other similarities) we had lost the ambient sunlight that was supposed to shine through my room’s 30 foot window  – through  my dress  – and light  my  junk  on  fire for the camera  lens.

“We’d better hurry  and  shoot  outside before that hits us”  I  said,  pointing to ominous black clouds that were quickly rolling in.

By the time the elevator doors  to the fifth floor swimming pool opened  it had already begun to rain and the wind was  starting  to kick up.   I got Wael to capture the  ambiance of  the rain as I walked in front of the camera showing off the curves of my ass for my Twitter and then  the rest of my body and face for our onlyfans subscribers.

The wind was whipping my hair around so though it was beginning to rain harder we stayed outside and I got her  to  take several shots of the wind playing with my hair and hoping the raindrops pounding my cleveage would make for an exciting shot or two.

Just as we stopped recording that brief five minute photo set there was a whoosh  – a big whoosh – if I  could write  it  it’d be as dramatic as the word effects in Dr.Seuss’s Green Eggs & Ham.  WHOOSH ,  and right  in front of  us one of  those  white sun bathing chairs was lauched into  the pool as if Luke Skywalker had force pushed it himself.

As if somebody turned the shower handle to the “Ludicrous Pressure” setting , rain began to fall sideways instantly soaking us and we made a dash for the  door leading  to  the common sitting room / kitchen and from within  watched  lawn   chair  after lawn  chair get tossed into the pool.

She looked  at  me and I  at  her ,  we both rolled our eyes agreeing silently that the photo shoot wasn’t going to happen at all.   The rocking thunder that blasted our  ears  a  second  later confirmed that thought and she rightfully so –  said her  goodbyes and caught the condo’s songtaew to the bts before the storm worsened.

And worsen it did. 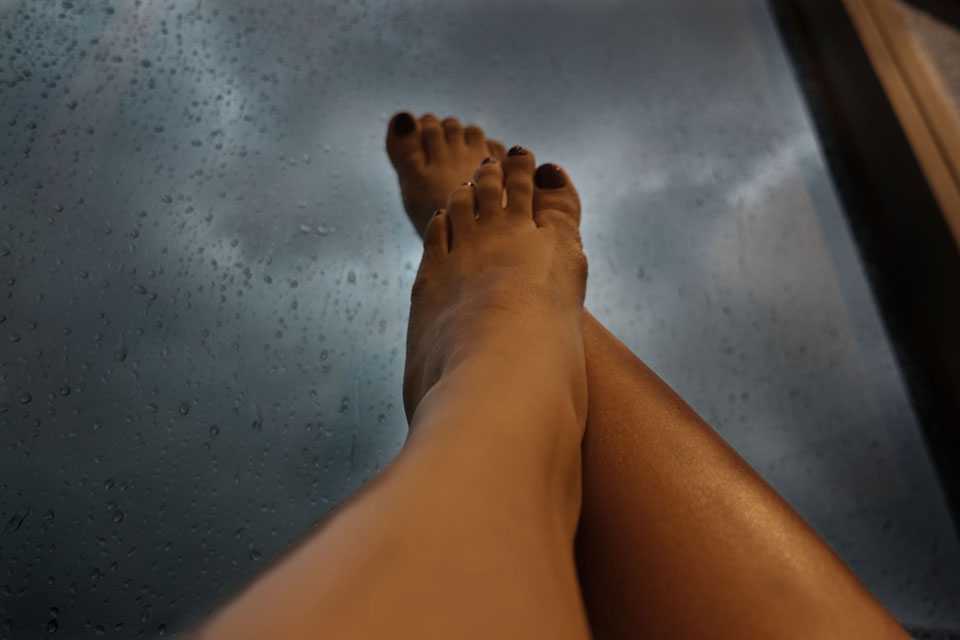 The moment I opened the door  to my condo and flicked on the lights  … which sit 30 feet above me on  top of  that massive cathedral ceiling  … I realized that the room was still 90% dark at 3pm, even with  those lights on.    There was a  “clack clack clack” sound coming from the balcony door and I saw that my clothes drying hanger had capsized to the left and  the wind was banging the pole against the metal over and over  … clackity clack , clackity clack.

I opened the door to grab my soaking wet clothes and I maybe got a small idea of what a fire’s backdraft might feel like as my ears popped  and the wind punched me a step backwards.  Yes, punched, that’s what it felt like.

So  you know  that  scene in The Wizard of Oz where Dorothy sees the tornado approaching and there’s an immediate sense of urgency and stress about her?  I tried slamming  the balcony door closed but the wind was  keeping it  well  ajar  while the horizontal rain was pelting my eyes  so  hard I could barely see.   Finally  I got  the  door  closed and was able  to  look out the window for  the first  time  … and   that’s  when that Dorothy effect  hit  me.

Outside ,  maybe 100 meters away,  was a cloud blacker than death screaming towards my window.  Scariest thing I’ve ever seen  in my  life,  hands down.

The lights flickered, and there was a Green Eggs and Ham Crack.   Not a rumble, and certainly not a booming sound,  but a crack that sounded like hell had opened up outside my 38th floor window.

For a second I sat on the fence about whether it’d be wise  to  take the elevator down and risk a power outage or to make the 15 minute decent down the stairwell.

I say a second because about two seconds in  total after that crack was blinding white light.

5 minutes.   I made it down those stairs in five minutes flat,  maybe 4 because I was leaping down seven  maybe  eight  steps  at a time using  the  handrail to cushion the landing.

I  pushed the ground floor big blue wooden door open to find myself beside a book room which I never knew existed until that  very moment.   I strode through the book  room and into the pool  room  – also seeing that for the first time.

The first door I  happened  across needed   my key card which i pulled out  of my tiny silver hand purse and I opened  the  door …. to the lobby – where no less than … oh say 25 people were taking shelter in as well.   Including the condo workers who were running in  and out to collect the fallen trees  I’d say there were  about 40 in total.

And  all were staring at me.

Why?  Because I was still wearing my black see through photo shoot dress  – which was soaked to the boob  – because I still wasn’t wearing panties or a bra.   My nipples  were saying  hello to  all  the  men  there  louder than I could  ever possibly  speak.

Instantly about 10 men accompanied by their girlfriends were dragged by their ear further down the hallway , way past the elevators to the secondary lobby. 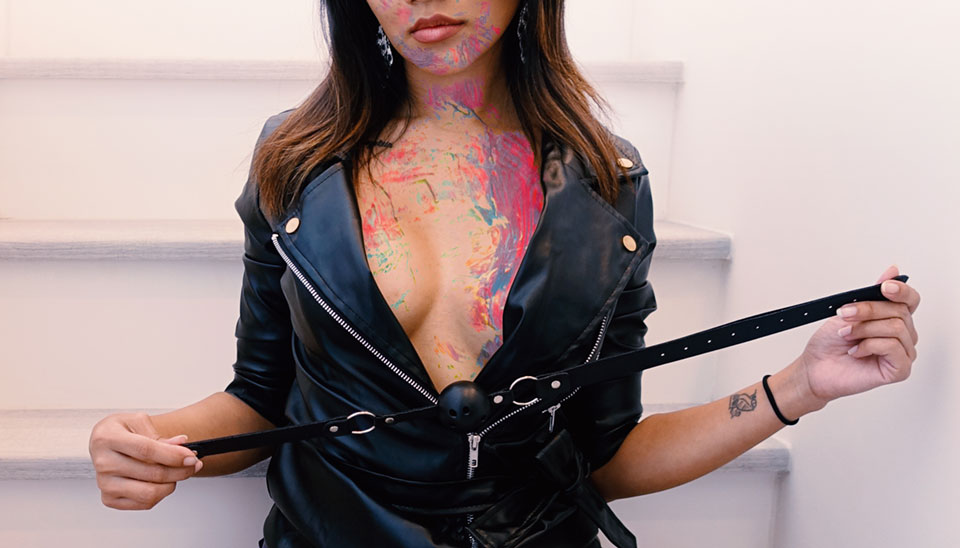 Behind me,  I shit you not, the 20 feet tall  decorative trees were bending horizontal from the wind and one by  one  were being toppled over and blown like wooden spears along the condo’s driveway  … the sound of the huge metalic pots they had been  housed in creating an ungodly screeching sound as they were blown by the hurricane* like winds.  (I’ve never been  in a hurricane, but that must have been a taste of what it must feel  like.)

Not one man paid any attention to the javelin trees hurtling along the ground being chased by 10 Thai workers in hot pursuit.    Nope.   Every eye was firmly trained upon either my soaking wet nipples peeking out from thin wet black fabric …  or they were gawking at the lips of my pussy thanks to my wet dress clinging to them like they were molded to my junk.

One hour, that’s how long that storm lasted in all  its violence.  Not one man left that lobby.

In  fact,  more joined.  By the time 4:30pm rolled around there must have been a hundred guys in the lobby  …  and  30 or so more in what was now the impromptu “couples only lobby” down the hall.

I’ve never seen such sad faces as when the rain suddenly let up and the skies brightened.

Fast forward to this  morning ,  I’d been  up all night learning photoshop and color correcting the few photos we had taken that come 7am I  realized I  still hadn’t  eaten since Wael had arrived at 2pm the day before.    I was crazy hungry , but rather than cook  in my  tiny kitchen I figured nobody  would be in the huge common kitchen downstairs.

So I grabbed some eggs from the fridge and headed  downstairs to cook.   This mom comes in with her son, about 6 years  old  maybe , he’s off to school no doubt.    But she sees  me , and  I’m wearing tshirt and jeans – she does an emergency 180 degree turn and a second later is nearly dragging the kid down the hallway to get away from me.

I smiled.  Why?   Two reasons really.   For one, that was pretty  much the same reacion every  parent had when they saw me coming  to say hi to their kid after or before school.  And two , I knew from that moment on I’d probably have that kitchen  all to myself every day for the next 11 months.