That doesn’t mean I haven’t been seeing my fair share of movies as well , I have of course seen every movie being shown at Terminal 21 , and continuing the trend of all Hollywood movies they’ve all sucked shit.  A friendly shout out to one of you guys who recommended I stay at home and watch Train to Busan on YouTube with English Subtitles as that ended up being the best movie I’ve seen this year.  Please keep throwing me great movie options to watch , my mouth salivates at every email I open that has a recommendation. 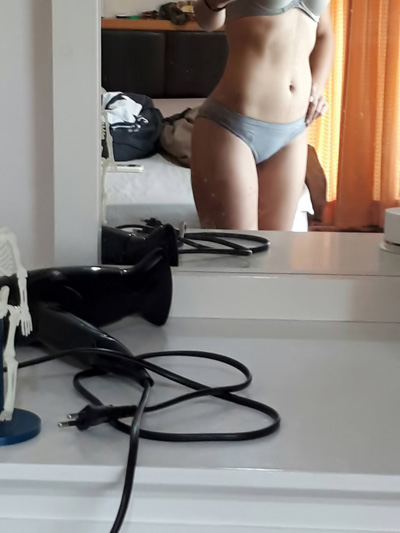 Other than last Saturday’s adolescent excursion where I paid for the first movie and subsequently sneaked into two more thereafter , my afternoon’s have been spent not just working out but pushing my body to the very limits of endurance.

There is no way someone like me in her 20’s , a non-smoker , non-drinker , and all-around healthy eater should have gone through what I went through the past two months medically.  What I’ve taken out of the whole experience is a re-dedication to fitness and a self promise to stay away from any food that has been touched by human hands.  I already had a pretty hot body but I’ve seen noticeable changes in my physique after a month long regiment that’s had me in the gym three hours a day.

I now look smoking hot, complete with a developing six pack that more than a few of you boys have begged to lick the sweat off of.

Whereas I used to wear sexy lingerie that accentuated my curves I’ve honestly had more fun doing sessions in a Victoria Secret bra and panties so that my delicious skin is right there in all its glory to make you salivate uncontrollably.  And what a difference it’s made in the sessions.  How so?

I’ve had a lot of fun lately popping in a movie and cuddling up with some of you on the sofa here in my panties and bra and just using one finger on your rock hard tree stump over the duration of the movie to bring you to tears.

That’s right.  No hand pumping , no bending or pulling whatsoever, just the slow methodical pulsing of your cock on the gentle touch of my finger as you look at my almost perfect naked body slink against you , forbidding you to touch the fruit so you covet.

I’d be very interested to know if a girl not so blessed with looks as I am could pull off the same type of sensational orgasm using just the one finger technique.  I think not as there is a lot to be said about the look of my body laying against you , the perfect curves , the soft touch , it all creates an uncontrollable desire. Surprisingly , some guys very much detest this kind of a session.  These are the dudes who all their lives have gotten too used to quick meaningless self-gratification , they are all self-centered around their wants and wishes which results in a total inability to relinquish control over to me.  I’m not at all interested in seeing somebody who cannot show a dedication to the focus it takes to endure such an unforgiving teasing session.

Whether I use this technique or not in the session depends on how I read the guy’s personality.  It takes a truly focused and committed man to be able to endure such sustained denial.  Are you such an individual?

Wael and I are more than a little bit tired of all you boys who cop out and elect to use your safe word a mere 45 minutes into your session.  For us it’s a bit of a let down to see a guy opt  for self gratification rather than seeking the other path of painful endurance.  For it really is a painful thing to deny oneself an orgasm and it’s a sad thing to see so many fail where they had hoped they would succeed.

Tease & Denial is not something to be taken lightly.  It takes perserverence , dedication , committment and above all , a desired focus to retrain your brain away from frivolous self gratification.  The one finger technique is the holy grail of such a journey.

One Response to Tease & Denial Techniques | #2 One Finger Ruined Orgasm