“Hello, how old are you?” is the first thing Mistress Wael said to her daughter talking on Skype behind me as I am getting ready for what will probably be the last session I do at this condo I got for her and I.

“Arai wa?” answers her 10 year old daughter which is the English equivilent of “huh?”, and Wael glances up at me with a look that is very much the same facial expression a bank employee would make with a gun to her head after improperly entering the code to the bank’s safe.

“Tell me how old are you please?” she tries again slowing her speech down to the ridiculously slow speed that a foreigner might do ordering a Big Mac in McDonalds in China.

This time silence on the Samsung Tablet as her oldest daughter runs to grab the younger 9 year old daughter to tackle the response together.  As they are both off screen Wael, speaking in English to me says, “she’s not in Government school I pay for both to go to higher level Ekkachone school to have better school (education)” and then gives me the best “omg what can I do” look one can possibly make.

Nothing.  The next alternative is 200,000 baht a year international school which will actually have an English program that involves teaching and not endless copying.  In the 6 months that I have

known Wael on a higher level she had never mentioned her two daughters to me or much else about her personal life and I’ve never asked.  We have had a working relationship strained by the 10 year age gap between us where the younger person is assisting and tutoring the elder.  Fine, except the worldly knowledge gap between us might well be as big as the Grand Canyon.

So the hopelessness behind her question “what can I do?” carried more weight than normal, the older asking the younger for advice in a society where exactly the opposite is mantra stamped into our brains from birth.

This is like someone who has fallen into a volcano and landed with two broken legs on the only patch of rock surrounded by lava looking up and asking “what can I do?” and expecting the voice from above to come up with comforting words and a lifeline.

“Really?” i said with more curiosity than a cat who had just popped the lid off of a garbage can.  After dropping and shattering the first 40 commandments stumbling down from the mountain I wouldn’t have been more shocked if Moses himself had said “I know what to do” holding onto the last 10.

And then FUCK if she didn’t come up with the most amazing science fiction thought right then and there that I honestly don’t know what else she could have said to have blown me away more.

In Thai she came up with this :

I want to create a society where at birth if born female that gender gets privileges like free international school, free food, and free clothes all provided by the male gender who at birth are required to be castrated.

I’ve never spat up food before laughing until I heard her say that.  After my last Salsa class I had danced around the condo showing off my moves for her a little bit before sitting down to read an email that requested a castration session which I told her she could do so I wonder if she got the idea from that?

I mean I’ve started calling her Mistress Angel Wael because she has such innocent thoughts that only maybe Bambi would have more of, so to hear her say something like that is truly great.

“Pii Wael” I began again after she finished her conversation, “we have to talk about the condo.”  I said in a cautious way similar to how one might dip her toe in a swimming pool to test the temperature of the water. 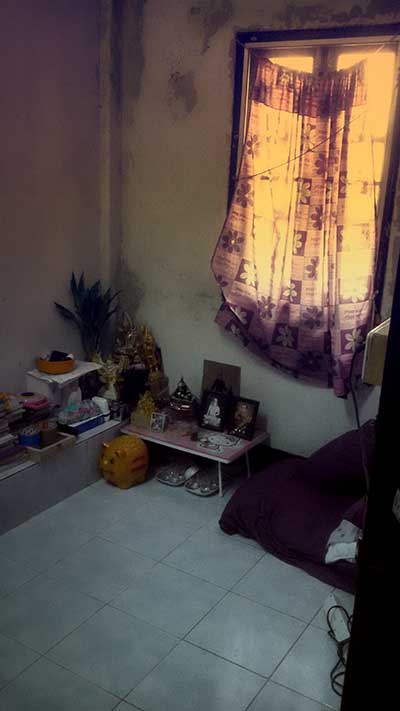 Cautiously because we were about to talk about issues that I thought were beyond her scope of thinking.  This is a girl that had resigned herself a few years ago to living in a broken down room half the size of a prison cell because her Thai boyfriend had abandoned her and her kids, and had the bank not only foreclose on her tiny house but seized her bank account for three years from his choice to pay the whiskey bottle rather than the mortgage.  I told you in my Fatal Attraction story that I have this medieval image in my mind that I’m hoping an artist creates for me which addresses this problem, it’s all too familiar of a story of village life.

My clients, and by that association, her clients deserve as close to a 5 star experience when coming for sessions which means the condo we work out of must look the part.  To get that feel I chose a newly built condo without the amenities that I enjoy like a gym, a swimming pool, a garden and went for a very convenient and safe location with a 5 star look to it.

Those who follow me closely have known for a while that I’ve been searching for a new much more luxurious condo closer to the heart of the city where my clients stay and as of September 1st I’ll be moving from my On Nut condo finally at the age of 28 to live in a super sweet 2 bedroom condo much closer to the heart of Sukhumvit.  Which leaves the question that needed to be discussed with Mistress Wael, what do we do with the On Nut condo that I’ve rented for her to stay in, the place we’ve done our sessions for the past year?

This is ‘shit or get off the pot’ time for Mistress Wael as she has to choose whether she wants to go back to being a cook in the hotel for 12 hours a day making 20,000 baht a month or make that in a week doing her Tease & Denial Massage sessions which she has built up a very loyal and ever growing clientele for.  I know her desire would be to take the safer impoverished way as that’s what has been taught to her since childhood.   I shed myself of that shit way of thinking living oversees and ever since I’ve come back I’ve had this “fuck this shit” attitude that can’t be helped.  I’ve been to Oz Auntie Em and fuck the ruby slippers, I didn’t wanna go back home.

Mistress Wael decided to engage her entrepreneurial side and will be doing her Tease & Denial Massage sessions from the same condo or double mistress sessions from mine.  I’m so happy that she chose to do so, my responsibility now is to profile her more on my website because she certainly pleases the older demographic of people who send session requests.

The new condo is a few minutes walk from any hotel if you have chosen to stay on Sukhumvit Rd.  while Wael’s condo is still 12 minutes away.  All the place needs is for September to roll around so I can move in and add a little bit of sexy to the place 🙂