oston had excused himself to go to the washroom and I had gone to the hotel room fridge for a bottle of water to cool myself down.  The hot sticky muddy air of Bangkok had not let up even though it was well after 4am and ever since getting out of the taxi I found my body was tossing out sweat the way water would drop from a wrung sponge.  Standing there gulping down the water by myself with cuckold guy so motionless on the bed in front of me he seemed as good as dead and with Boston taking longer than expected in the bathroom I felt like the wind had been let out of my ship’s sails and the night was drifting aimlessly for a moment badly needing direction.

I left the half empty bottle on top of the fridge and went to fetch Boston from the bathroom and upon opening the door to see what he was up to i caught him propped over the sink with his left elbow holding him up and his right hand working his dick with his jeans and underwear hanging around his knees.

“I can’t do anything with a guy in the room, i can’t even get it up in here” he cussed with frustration spanking his thing around like it was a tether ball.  Seeing him standing there like that for me was hot and tempted as I was to say something trivially smart like how ‘I’ could make him hard I instead went for something a little bit bigger to cure my desire. 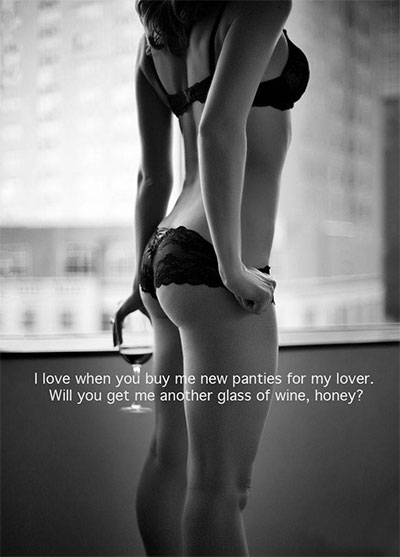 There are two things that turn me on so much that when I play with myself alone in my room they are the only two things that I allow into my mind to fantasize about.  One is obviously the need to take control of the situation and have the man wrapped around my finger or have him willfully submit or beg me.  The second fantasy is considerably harder to explain, I really cannot put into words why I have had this fantasy since a very very young age.  It doesn’t mesh, isn’t symbiotic with, nor supports my first desire of having the man under my control at all.  It’s such a polar opposite desire that I have spent many a night pondering why the seed exists in my mind in the first place.  I’m talking about the desire to be raped.

It’s not that i need a man to control me or be dominant with me, I’ve had that with many lovers already.  It’s not that I want to be slapped or hurt either.  Not once has my fantasy ever materialized in a dream with me being hurt.  What I can summarize is that it comes from dominating men so much that it’s almost like i’m daring one of them to fight me back and give me a challenge.  None have.  The moment men realize that the pussy they are after is not as accessible as they had thought they shy away at the challenge.  Yes for most it would be a useless challenge but just like the same 100 men who send me an introduction letter to my dating site profile, one of those guys will eventually be a winner.  Eventually i have to choose one right?

With both hands holding the doorway i leaned in a little closer to Boston so he could hear me whisper my challenge, “if you can get these jeans off of me and find a way to get your cock an inch into my pussy i’ll let you fuck me”  That got his attention immediately, his face looked like a teacher had just woken him up in class and was trying to make sense of what had been asked of him.

He only said “whoa hold it a minute” turning to face me at the doorway.

Dammit it’s like going fishing and seeing the fish follow the lure back to the boat but not biting.  Curious, but not hungry enough … yet.

“whoa” meant more than any words i could come back with to entice him to go forward with my idea.  Putting myself in his shoes for a second I got a sense that his desire for my pussy wasn’t nearly enough to excuse the strangeness of this situation I had put him in.  There was already another man in the room which was already attacking a male taboo, to ask him to force me out of my pants could look like a setup perhaps.  I’m Thai, and worse, I’m a Thai lady, and that carries so many stereotypes with it that life is always like starting a game being down 4-0 to begin always.  I needed to do something to suggest I was anything but a stereotypical Thai girl and the only thing that came to mind was to propose that this whole thing was a bad idea and that i’d rather just go home for the evening.

I turned away from him dejectedly and marched over to the bed to put on my high heel shoes, thereafter picking up my black hand purse from the night table beside the bed.

“whoa whoa where are you going, what are you doing?” he said stepping in front of me with his arms out like a traffic cop. 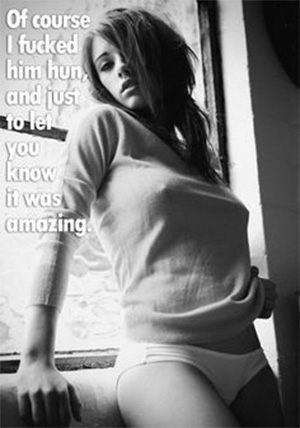 “I shouldn’t have said that, bad idea, let’s just call it off here cuz i’m gonna go home.” making my voice sound as disinterested and my body actions as distracted as I possibly could.  For as long as there have been humans the male mind and his dick have been at war.  From his dick comes primal desires, and the actions that his penile brain is in constant turmoil to control but it’s the higher thoughts from the human brain that bring the dick only woe and grief.  The strings of reason in between those two realms are hopelessly flimsy and its there inside that forever weakened space that I attack.

He pushed his cork back into his waterskin locking it inside with a snap of his pant waist button.  With his zoo animal secured he reached out to my shoulder.  “I can do that” Boston offered.

“Too late” i said brushing his hand off my blouse instead bending down to put on my shoes giving him a nice look at my ass in doing so.  “Let me” was his reply breathing out forcefully through his nose as both hands grabbed around my waist looking for my zipper.  But the grip was playful akin to how an old man would embrace his walker, not nearly as forceful as I wanted him to hold me.

I slipped into my Goddess skin as quickly as a chameleon changes its colors and turning quickly to catch him by surprise I slapped him across his face, maybe a bit too hard as the momentum of my spin added to the force and his head snapped violently for a second to his right.  He hesitated for half a heartbeat, and then grabbed for the front of my jeans.

I”m forty something kilos soaking wet and yet he had yanked me with the force of someone moving a training dummy in a gym.  So much so that my head snapped backward momentarily before accelerating into his chin just as he was leaning in to kiss me.  The comical aftermath of the collision caused him to stagger backwards into the foyer wall and I saw a trickle of blood pour down his heavily cut lip to his chin and splash on the floor beside a tiny black spider which had been making its way across the room.  It looked up and said emphatically  “STOP,  breaking the fourth wall is a bad idea.”

Agreed, but it has to be done.  Because if I had told you from the start that ‘Boston’ is my boyfriend, well you wouldn’t all have your dicks in your hand while you’re reading this like you all do.  When it comes to eroticism, guys say it isn’t like it is … but it do.  Since this is an actual recount of what went on in that session I’ve gotta tell you that seeing my boyfriend, a One FC fighter, one who has never been knocked out, standing there slumped against the wall with his eyes rolled to the back of his head and blood streaming down his chin onto the floor was one of the single most horrifying and yet hilarious moments of my life.

A short list of things that were running through my mind at that very second: 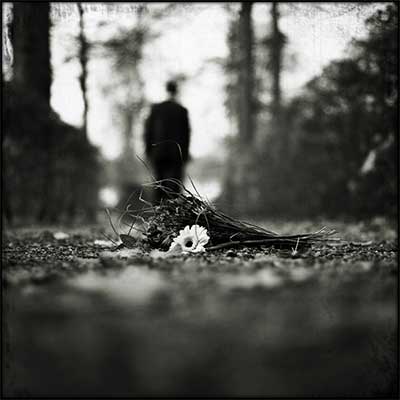 So I did.  I laughed.  Then just before Boston came to his wits and blurted out “what the fuck …” to ruin everything by shouting out my real name …  I slapped him.

Then of course I did what every sensible tiny person would do after bitch slapping The Hulk, I ran … towards the bed but I gave Boston’s dick a quick squeeze through his jeans before I did hoping he’d pick up on the improvisational cue.

Ya it was a risky thing to do but let me tell you about the rules of poker when it comes to men.  “Hulk Fuck” trumps “Hulk Smash” any day of the week.  As I hit the bed and slumped over it I pulled my jeans down a hair just at the last second which is like hanging a crane magnet over a car … my ass being the magnet, Boston’s dick being the car.

My heart thumped to the cadence of his steps as he raced across the room and after he jerked my shirt half way up my back I felt more the drip of warm blood on my back than I felt my jeans being yanked down to my ankles.  I looked up at the cuckold guy to see his face a foot away from mine on the other side of the bed, his forehead completely covered with beads of sweat.  He must have been in that zone where time stands still for he never blinked once as he shifted his gaze from me at first and then to this huge cut muscled guy taking me from behind with blood dripping off his chin onto my back.

It wasn’t at all how I had planned to set it up, which in retrospect would have seemed fake as hell, but I had somehow reached that moment which begged the question I wanted answered in the first place.

As Boston pushed my head to the bed I looked at cucky sideways with a fake grimace and forced out an equally fake gasp as I asked him with a quiver in my voice ..

Meanwhile , who’s the sexiest ladyboy of these 5?  Read the story, or just cast your vote.  Thanks. Like voting?  Then vote for who’s had the sexiest ass ever here at jaa4u.  Careful, I spank hard and I hold grudges.  Vote accordingly.