“I’ll do anything you want” is a dangerous thing to say to me.

Most guys just throw that line out there as if it has zero consequences, for instance, after my last story – and with follow up proof that the black and white photo is indeed my pussy – I’ve had emails well into the double digits proclaiming “i’d do anything to kiss that pussy.”  Not thinking for even a split second what possibilities a phrase like that stirs up in my imagination.

If you remember only one thing about me, remember this : I love using men , I love putting men in precarious positions that leaves them exposed and vulnerable.

So while “i’ll do anything to kiss your pussy” isn’t anything out of the ordinary , there is the occasional time that saying ‘i’ll do anything’ can come at the very most inopportune time for you.

Such a situation of happenstance came up yesterday , one that was two years in the making.

So to lay the roots of this story it’s important to know that Mistress Wael – as I’ve referred to several times on Twitter – is an avid hockey fan , yup believe it.  It started with her loving Chicago’s goal song Chelsea Dagger , and evolved to an ongoing crush she has over Patrick Kane a hockey player on that team.  In fact, the only person she would drop her panties for more than him is Rod Stewart and she begs me no less than once a week to find a man who will take her to one of his concert stops.

Gotta work this into a Tease & Denial session somehow !! pic.twitter.com/tiQg5dM6aI

As a side note, probably I’d guess one of the most pleasant differences between her sessions and mine is the throwback music she plays while you’re tied up and being teased by her.  I’ve had endless guys write me saying they loved singing along to Rod Stewart , Johnny Cash and Neil Young while being teased mercilessly … but make no mistake , when she’s got your cock in her hand and  Rod’s “I Don’t Want to Talk About It” plays on the computer – it’s not your dick she’s imagining in her hand.  XD

Like I said, every morning from October to the Spring she’s up at 6am watching hockey before going swimming – and I’ve encouraged her to keep showing interest in anything and everything from abroad be it America, Canada, or Europe as it makes her different – and different = desirable in my books.

Two years ago , I asked a guy – Jack from New York –  who was coming to see me to grab a hockey jersey.  Except he wasn’t in New York at the time, he was passing through Montreal.

I would have preferred to get her a Chicago jersey but failing that I had to look up and see if there was a team in Montreal from the NHL.

Now as I usually do when researching such things, I go on a Google journey of sorts. 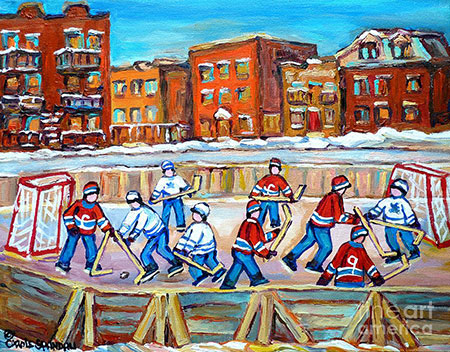 Like, in finding out about the Montreal Canadiens I googled “Montreal hockey jersey” which – when I clicked on images – brought up a lot of art which I thought was peculiar so I read up on the artist , which led me to find out about the history of hockey in Montreal and from that I picked up that there is a rivalry between them and Toronto that’s as fierce as any in all of sports.

It’s little things like that which make me adorable in conversations , I have a basic limited knowledge of a great many topics all due to these Google journeys I go on.

If you recall back to the stories and days where I was dating a Bostonian , I went on a similar journey that made words like the Freedom Trail, The Green Monster , Fenway Park , and the Boston Tea Party part of my collection of things I could throw at someone over dinner to surprise them.

I asked Jack if he could kindly pick up a Montreal Canadiens hockey jersey for me and present it to me in person when he arrived for his session , and he agreed.

So I had this hockey jersey as a gift all ready to give to Wael on her birthday when as luck would have it I got a session request from a guy in Chicago.  Right off the bat I asked him if he was a Blackhawks fan and he replied almost immediately that he was – and added – how the hell did I know about the Chicago Blackhawks.

I told him Wael’s obsession with Patrick Kane, the goal song , and watching hockey fights and he agreed at my request to bring her a Chicago jersey that weekend – 2 days before her birthday.

I got so excited in wrapping up the Chicago t-shirt (t’was a tshirt in fact, and not a jersey) that I totally forgot about the Montreal jersey … and to this day it lay untouched in my closet … 2 years later.

It’s presence in my closet had totally escaped my mind until yesterday when a guy who I only knew as being “from Canada” shows up for a session.

His name was Jean , born and raised in Boucherville Quebec just a stone’s throw from the Bell Centre in Montreal.  Pretty much – looking at Google maps.

As luck would have it , t’was Jean himself who brought up the topic of hockey while announcing that he was going to be late for the session as he was stuck in traffic on Rama 9 coming home from his hockey game.

“Ya Hockey, if you knew about where I’m from you’d know it’s in my blood to play – wherever I go.”

‘As a matter of fact’ I thought, I do know where you’re from , thinking back to how people from Toronto and Montreal – and I guess Minnesota too (right Steve?) have hockey coursing through their blood.

Fast forward an hour, he’s been in my condo for only about 10 minutes and we’re doing the chit chat thing over a glass of wine when I gracefully drop the line ; “do you think I’d look sexy in a hockey jersey?” while pulling on my sky blue and well worn t-shirt.  I’m such a flirt  XD

“You’d look magnificent” Jean was quick to reply, but I was even quicker to retort with this as I had the line in my mouth and ready to go “how about a Montreal jersey?” 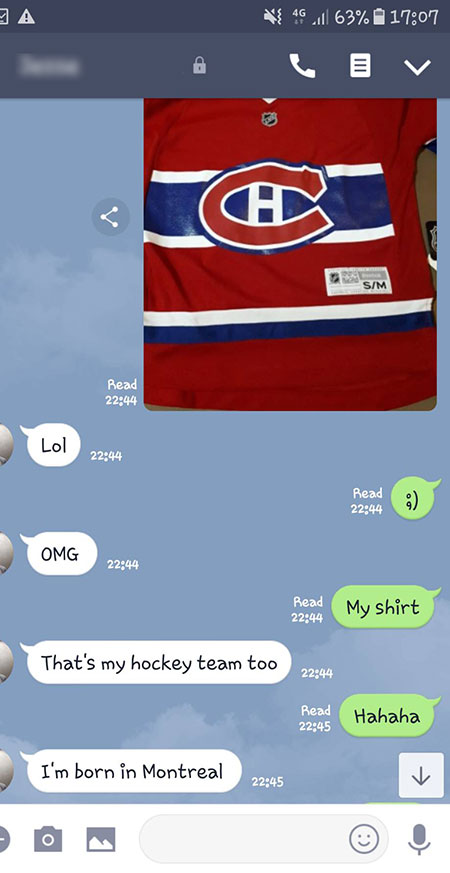 Now months earlier – back when I was experimenting on toying with men’s mind thru a dating service – remember? – I was talking to a guy from Montreal and dropped it on him that I had a Montreal jersey … and his OMG reply stuck in my mind as I didn’t expect him to react so favourably to my photo of it.

It was one of those “geez , I could really use this as shock value” moments and I filed it away in the back of my mind somewhere.

Well here it was, a shock value moment right in the palm of my hands , oh but how to use it effectively enough?

Jean’s reply to my question provided the fuel I needed “HAH” he laughed quite loudly “I’d do ANYTHING to see you in a Habs jersey.”

That Google trip two years prior had taught me that Montreal was lovingly referred to as the Habs by locals in Quebec so I wasn’t caught off guard by his colloquial use of the term Habs.

I stood up and grabbed the bottle of red wine that we had just opened.  Then I proceeded to the kitchen where i promptly emptied its contents fully into my sink – much to his astonishment.

Then, blocked by the chest high counter that I stepped behind I took off my panties and tossed them on the floor in his general direction.  He looked on, as that pink frilly piece of lingerie daintily fell to the floor, with an even greater sense of astonishment.

Right there – in the middle of the kitchen – I filled the wine bottle with my urine – the sound of which caused Jean’s jaw to open slackly and hang there with a slight drool forming on his lip.

After rinsing my hands and the sides of the bottle in the sink I brought it over and placed it on the coffee table directly between me and him and let the air sit silent for a few moments.

“Huh?” he replied , his eyes darting between the Vintage Wine Bottle of pissé de moi and my face.

“You said , you’d do anything to see me in a Habs jersey.  And so , if I can produce a Habs jersey right here, right now , I want you to drink that whole bottle in one shot without stopping.  Or leave immediately.”

It’s like having a Royal Flush in poker and knowing with certainty – after the chips are all in – that your opponent has only a 2 and a 7.  lol

Jean thought for a moment, scratched his head quizzically with his left hand, and asked softly “do you know hockey?”

“Nope.”  (a white lie as I have watched some of it with Wael on occasion)

Then boldly he asks “and if you have no jersey to put on , what then do I win?”

If you can bear the thought, I walked past the coffee table and straddled his legs as I said that , sitting down on his knees right at the moment where I told him “as long as you want.”

I was wearing my boxing shorts at the time , which rode up mighty high on my thighs , and I “may” have pushed the front of them down with my thumb to give him a glimpse of my hairless snatch.  I told you i’m a hell of a flirt.

This time he rubbed his ear in a circular motion.

“Well …. deal then” Jean said with such an ‘all in’ convinced tone in his voice and a cruel devilish smile , one that was way way way surpassed by my own.

I lifted myself off his knee, did an about turn and marched myself off to my bedroom where moments later I jumped back out into the hallway with my Montreal Canadiens jersey in full show.

The look on his eyes was priceless.

“Mon Dieux” he sighed disappearing backwards into my couch , kind of like this Homer Simpson meme you see.

I smiled.  No – I laughed.  At first it was a smile, and then it morphed into an uncontrollable burst of laughter.  Cuz I got him.  Got him good.

Then I playfully walked on my toes almost dancing on the air as if I were floating on a cloud and grabbed the bottle of ‘wine’.

Presenting it in front of his face I asked him coyly: “Do you know what I have here in my hand?”

There was no answer from behind the bushes of my couch , just a negative wiggle of his head from left to right.

“Why … Piss de Resistance” of course … and laughed again.

With his left hand yet again he cupped it to comfort the back of his head and let out a heavy heavy sigh.

I placed the bottle in his right hand and lifted my wine glass which still had some of the red Beaujolais in it I had poured before.

“To the Habs” I cheered.

Defeated he raised the bottle , clinked mine and toasted toward my jersey : “to the Habs he said” … and downed a bottle of the world’s finest wine in one continuous shot.