Now hold on, before you start pulling the blankets up over your eyes and cringing like you just saw a fat woman face sit Elmo, allow me to comfort you by saying that using a cactus to destroy a man’s balls can indeed be cathartic … IF the proper steps have been taken beforehand to seduce his brain into thinking so.  Thus, to accurately set up the how and why of using my beloved beauties as sandpaper for his balls while I impaled him on my rubber dick, you need to first know the ‘what’ , as in the what happened beforehand to set up his session like this.

No not that kind of retribution , this kind :

“I’m coming to Thailand for two weeks myself to relax and see your country. I will admit it’s not just to see Thailand though, and my booking is kind of based around this concept. I like reading your blog, especially the Fatal Attraction entry. I realize that as a well off western tourist I have no idea of the struggles of Thai people. I’m sitting right in between 3 and 4 on the Maslow pyramid and the reason for my trip is to have fun and I’ll be honest be a real hedonist and see a lot of working women.

I intend to tip well but I do realize what I will be doing is very exploitative. I would like my session to start out fairly light, I have a foot fetish so some mild foot fetish stuff to start with into something else mild like smothering, and if goddess allows, body worship. However as the session develops I would like my goddess to get quite angry with me, challenge me on why I’m really there in Thailand. Maybe I could make a pass at you in session and offer you money for sex after the body worship, something to anger you anyway.

I figured the least  I could do for the guy was to give him a map of Bangkok to help him with his travels, so I sent him the best map I could find that was relevant for a guy like this …

So I first set up a dinner with the guy and I purposely brought my kind sweet innocent self to the restaurant while at the same time being dressed to kill and thus leaving him thinking “there’s no way that girl, as beautiful as she is, can possibly be a mistress.”  I’m perfectly aware that when dressed like that every guy’s first reaction to seeing me is “oh my god” and the second being to discreetly re-cover his underwear over his dick.  I suppose by his account that his cock was too massive to do so though that evening: 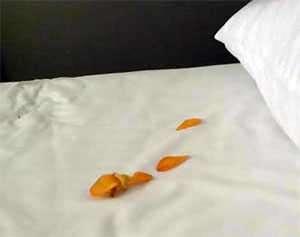 “I’m sending this by email because it’s late and I don’t want to disturb you with a text. Also it’s a bit much for a text.

I feel so conflicted, after we parted I did end up going back out after changing and I ended up taking a bar girl back to the hotel. She was really drunk and I was as well and she said she was 21 but I really have my doubts.

I tried to treat her the best I could. But I slipped for a moment. I could tell I was hurting her with my size. I asked her twice if she wanted me to stop and she said to keep going so I used some lube to try and make it easier for her.

I wish I could say I took it really slow from there but the animal in me took over. I was selfish and went slow a little but then I got so into it and went harder than I should have. I really hope I didn’t hurt her too much but I don’t think she enjoyed the sex at all and she was too tight for me but felt obligated to let me in that moment and endured the pain for me. Which just feels wrong to me.

The only part of this that gives me hope is she saw another girl from the club when I walked her down and she chatted with her happily. So at least she wasn’t upset I think.

I really appreciated your company tonight and I’m telling you this because this is why I would like a session. This is why I came here to Thailand and the cruel animalistic part of me loved that I could have sex with such a young, pretty and tight girl. For one moment the worst side of me came out and took over my mind.

I fucked her on a flower that broke. It’s almost disgusting in it’s poetry. I want you to break my flower. I don’t think I can back out of our session. I deserve it.
I should be made to feel a similar pain and have to put up with it to please you. Gag me if you don’t want to hear screams. It’s my only way out in this session I feel. Just as these girls think their only way out of my hotel room is to please me…” 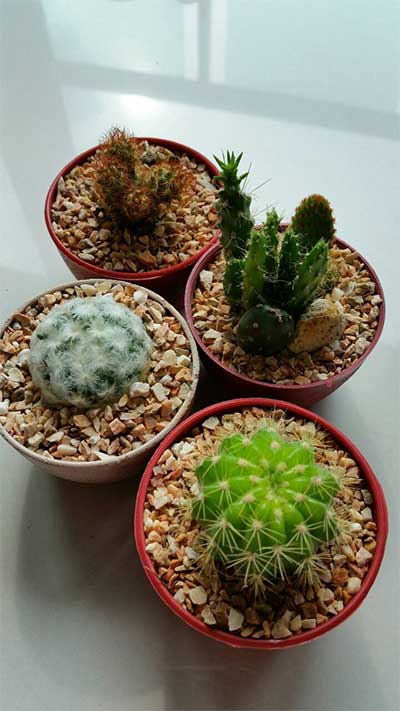 I’ve gotta admit that since moving into my condo last month I hadn’t yet experienced what it was like to live alone as I’ve had my live-in slave with me for the better part of the month, but now that he’s gone the first feelings of being alone have crept over me.  Whereas on the one hand that’s great for turning out the lights all my lonesome and watching scary-as-hell horror movies, it also has its moments where its tedious to be so lonely at times.
The first feelings of loneliness hit Saturday evening after the slave guy left and I realized quite suddenly that I truly hadn’t been so alone since arriving in New Zealand with a suitcase and my clothes 5 years ago.  What you don’t know is that when deciding what to take to University back then I only packed one item different than my clothes, and that was my cactus plant that I had talked to for years while in uni here in Thailand.  It ended up being the only thing I talked to other than my diary for a month back then and so, feeling the same loneliness I went to Chatuchak market to buy 4 new friends to talk to.

I talk to plants not teddy bears.  Want to buy me something to impress me, buy me a Bonzai tree, not a Gund.  Coming here to Wael’s condo to do this story early this morning I caught her sleeping with her Gund Teddy Bear that some stranger bought her from her Amazon Wish List, while mine are all buried somewhere in my mom’s closet I think.

It was while talking dirty to my cactus on Monday that I got the idea of using a plant to break this guy’s flower.

Being rather small, th 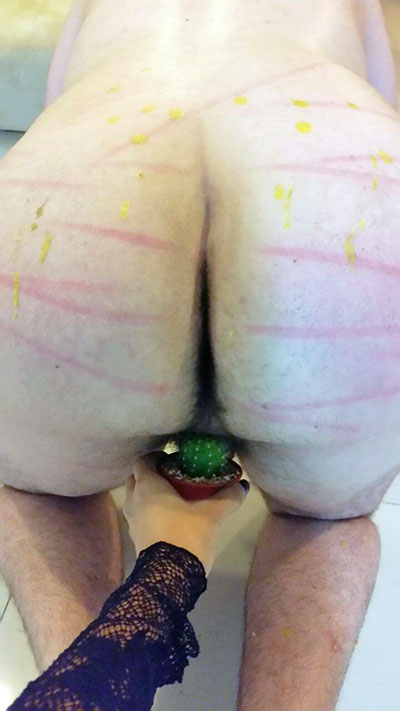 Wonderfully, I’ve found that sinking his scrotum into my cactus totally prevents any twisting motion of the body while banging him from behind.  Therefore, the only problem left to solve was the pain of cacti needles making bigger and bigger holes in his balls.  A problem simply solved by making that the lesser of the three other pains I had introduced while fucking him.

I guess the worst of them being trying to burn the hair off his testicles while nailing him but lets not discount the discomfort caused by my other hand dripping hot wax over his ass at the same time.  Nor should we lessen the effect my whip had in keeping him motionless throughout the ordeal, I’m sure the deep cut marks accounted for its fair share of his stillness.  A bit much?

You’d think so, and surely if I had told him straight off through email of my intentions he wouldn’t have showed up.  But there’s something to be said for sex appeal, or well, just being drop dead gorgeous that gets guys to voluntarily submit themselves to more pain then they normally could tolerate.  As I’ve told you before, guys do things for me that they never thought possible, and what’s better is that not only do they love every minute of it, I do something for them that sticks in their minds for a very very long time thereafter : 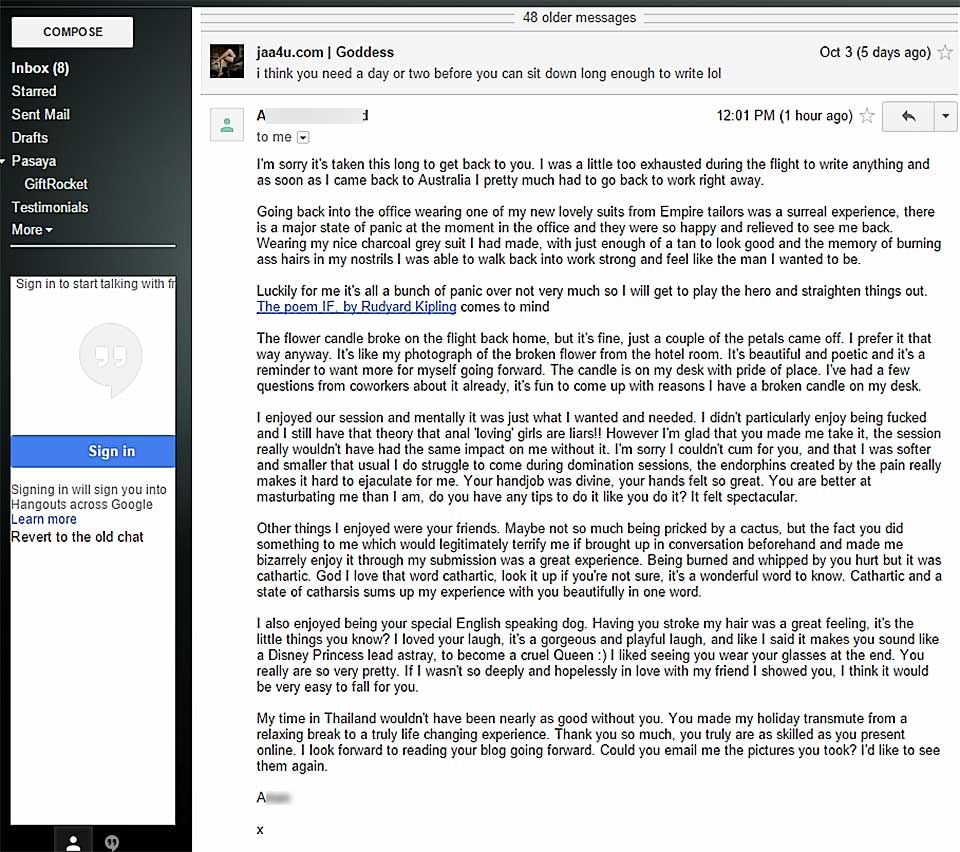 How nice to have bought something so cathartic that it can soothe both me and my submissive pets.  Care for a therapeutic consultation?  haha 😉