And so it is
Just like you said it would be
Life goes easy on me
Most of the time
And so it is
The shorter story
No love, no glory
No hero in her sky

I’m not just going to recommend a movie for you to see, I’m going to implore you to view it for me.  Not because it’s great, which it is.  Certainly not because it’s complex, though indeed it’s complexity is saturated.  Nor does my recommendation come from it’s message, of which there are many by my estimation.

No, for the reason that I need you to see the movie Closer is that if you really ever wanted to understand who I truly am , the girl behind the Mistress’s mask if you will , then you definitely need to explore Natalie Portman’s character Alice for the absolute microcosm of my life that she represents.

I’ve never cried watching a movie, ever, but this one brought me to tears simply from the happenstance that Alice is a wholly accurate representation of myself , profession aside.  Though be it through her profession as a stripper, or mine as your Mistress, both the end of the movie or a session with me forces you to ask if everything she or I did was a form of stripping, in which much is revealed, but little is surrendered?  “Lying is the most fun a girl can have without taking her clothes off,” she tells Dr. Larry, “but it’s more fun if you do.”

The lie , in this case her never revealing her true name to the man she loves at any time in their relationship , acts like a shield , she needs it to protect herself from a man she never fully trusts , yet wants to with all sincerity.  Much the same way you guys address me as “Jaa” , something that gnaws at me every time I answer an email , and you’ll notice that once we’ve established a sense of trust in our relationship I eventually reveal to you my true name.  Sorry to be a bit esoteric here , but those in my tight group of submissive’s who have become somewhat of a group of friends know the reason of why I hide behind a moniker other than my own , and for nearly a year now I’ve been trying to find a way to once again share to both strangers and friends alike a sense of who I am , without revealing so much that it endangers my safety. 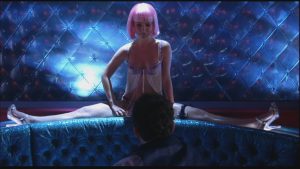 Alice arrives in England running away from a past relationship much the same way I ran away to a foreign country to study English abroad having immediately just before turned down a marriage proposal from my Thai sweetheart of 8 long wonderful years.  I broke up with him on his knees begging me not to leave him and though I didn’t say the exact words Alice said in the movie , “I don’t love you anymore, goodbye” the feeling inside me was equally as cold and final.  Indeed, every man since that I’ve walked away from has been just as cold and sudden.

There is no reason for a heart to linger once you’ve been lied to.  I’ve read countless posts about Alice’s personality with people misunderstanding the basic reason why she just walks away from men and disappears without contact.  One has to be unplugged from the Matrix to understand her reasoning , and has to have somewhat of a nihilistic approach to people and their actions , but to explain it as simply as I can – on the whole ; animals are better than people.

One line in particular sums up my thoughts on that statement perfectly , it’s in this nifty bit of dialogue which correctly hits a nerve of truth :

Dan: When I get back, please tell me the truth.

Dan: Because I’m addicted to it. Because without it, we’re animals. Trust me.

I’ve come to love animals over men , there’s a purity in their actions that I love.  A few of you who have found my Facebook have had a laugh over my involvement with saving animals , going so far as to donate money monthly to save as many as I can ; the latest being a pair of elephants.  Why do I give my heart to animals over men?  Well quite simply, I’ve been lied to by every man I’ve come to have a relationship with , save one – my first … and I , like Alice I think , am just looking for something pure to invest my heart into.

I feel for her.  This line especially :

Alice: No one will ever love you as much as I do. Why isn’t love enough?

Like me, she’s faithful to a fault.  If you’ve seen the movie, did you notice that Alice was the only one of the four who didn’t cheat while still in a relationship?  Yes she had sex, but it was long after she had broken up with Dan.  Similarly, I can truthfully say that I have never had sex outside of my relationships, I’m just as faithful to a fault as she is.   The movie goes out of its way to make a poignant point that such faithfulness is pointless as there is the sense that their trusts and betrayals are not fundamentally important to them; “You’ve ruined my life,” one says, and then is told, “You’ll get over it.”

I absolutely love that the two who fucked around on each other the most ended up – unwillingly – with each other in the end ; a stunning parallel to one of  my ex bf’s who is marrying the Thai girl he’s cheated on endlessly and she’s perfectly fine with forgiving him every time : may they live happily ever after roflmfao .  Ahh , what Thai girls will put up with to marry a foreigner , if I wasn’t so nihilistic I’d say it’s pitiful.  How come I’m not cut from the same cloth I wonder?  A little known secret about me … I was born with a set of balls , it’s just disguised as my clitoris.

In the end, Alice leaves Dan , choosing to be alone over being let down again as men are so wont to do and the final scene of her turning heads walking among a sea of sad strangers epitomizes my life here in Bangkok.

Strong, but sad and alone – no hero in her sky.