But, things are eating at me.

Again, sorry to be esoteric , but those in my closed group of friends that I’ve done sessions with will recall the photos I sent you last month when I attended the double weddings of my friends I’ve known since high school back in the village.   Remember?  Alright, go dig that photo up, i’ll get back to it shortly. 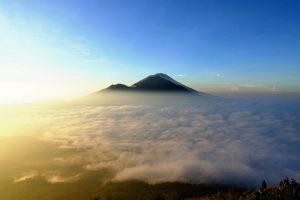 So, I’m just back from Bali where I left at 4am to climb Mount Batur and see the sunrise from above the clouds at the edge of the volcano’s caldera.  As you can see from the photo, it was one of those moments one never forgets , the majestic view was awe inspiring , and as I posted on my Twitter , dampened only by having to share the experience with the 200 or so other people who made the climb with me.  When I saw the movie Everest , it never quite hit me how annoying it would be to have to share such an epic climbing experience with every Tom Dick and Harry who decided to climb alongside that day as well.  A moment like that, one craves to share it in solitude I think , something which is probably not possible in the Instagram era. 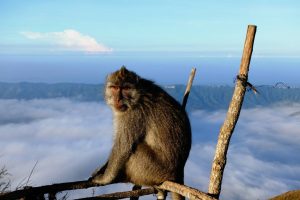 As this furry friend stops just long enough to allow me to snap a photo of him on top of the world I thought about just how lucky I have been to be able to visit 10 countries so far and I’m only in my 20’s still.  I’d estimate that a scant .01% of any girl born and raised in a Thai slum village ever gets to Bangkok, making the idea of travelling outside a far fetched dream, yet there I was taking in a spectacular view and thinking how lucky I’ve been.

Then it hit me like a Muay Thai liver shot (which i was on the receiving end of in my last training session) just how tragic the lives of my two best friends from high school have turned in the days since their weddings last month.

One of them … the one on the right in the photo I told you to dig up … she never considered that three weeks after her missed period she might be pregnant , went to an amusement park in Bangkok and went for repeated rides on the roller coaster there.  Coming home, she began to bleed profusely , and only found out at the hospital later that night that she had suffered a miscarriage.

Now on my Line App , we have a group of 5 high school friends who still talk to one another , a group that I normally have a hard time following due to the village type conversations that go on daily there , stuff like “what did you eat” , “who is so-and-so dating” , what happened on the soap operas today , yada yada yada.  When my friend posted a photo of her in the hospital recovering in sadness from her miscarriage , the second girlfriend … the one on the left in the photo … texted to the group … “you’re here too?”

Translating loosely from Thai to English the conversation continued as such …

“Why what happened to you, why didn’t you tell us?”

“I’ve been diagnosed with a cancer called Leukemia”

And it hit me that in all likelihood she’ll never get a chance to to ascend a volcano and experience the type of view that was before me, and she the same age as me.   If you recall from one of my first entries, I had a co-worker who worked right beside me get stricken by cancer and gave up her life some 30 days later.  While that was shocking to me , it didn’t hurt so deep as this one hurts and suddenly all my personal troubles seem so tiny by comparison.

So take a look at that photo if I’ve shared it with you , and realize that for whatever reason , out of the three , I’m the only one who has been spared a tragedy so far.  Gosh.

p.s:  i’m working on setting a newsletter up , one which people who have sessioned with me can subscribe to.  I’ll be sharing personal photos, videos, stories from that medium , and i’ll be test running it next week sometime ok.  🙂