Well it finally happened, we had a guy pass out from his FaceSitting session.  I guess it had to happen sooner or later as I’ve been catching on to the cheating games you guys play while down there and like a good repair girl, I’ve been plugging all the holes in the dam until finally there were no more holes to patch.  By that I mean, there are 3 types of cheaters that I’ve come to recognize, each playing his own game of self preservation while under my ass.

There’s the guy who turns his head slightly to one side as I sit on him allowing him to breathe partially out of either side of the nostril he chose to rescue from my butt.

Then there’s the head tilter guy, this is the guy who tilts his head up to the ceiling to allow a bit of air to enter through the top of his nostril while also allowing him more access than would normally be allowed with his tongue.  Cheeky, real cheeky … for whatever reason Brits try this the most often, must be because of their enormous noses. 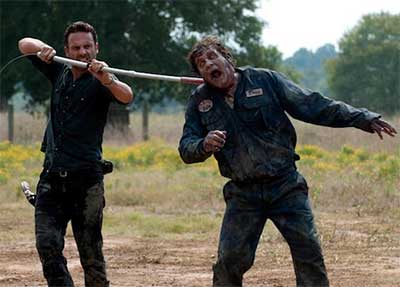 Then there’s zombie dude, right out of The Walking Dead.  This is the guy who opens his mouth as wide as he can but all crooked like so that his jaw looks like it got bashed in with the butt of Rick Grimes’s hand gun.  It allows the guy to be suffocated through the nose through the FaceSitting period but he sucks in air from his mouth making a noise similar to a zombie and thus why i call it The Walking Dead cheat.

FaceSitting Cheaters:  I’m on to you 🙂

I talked it over with Mistress Wael before today’s session and we came up with a viable solution.  I’m here to explain what we did so that you guys can think up of some fourth way to get past your FaceSitting count, maybe you’ll grow gills?

The solution is a simple as Wax On , Wax Off , thank you Mister Miyagi from The Karate Kid.  Or in our case, Oil on , Oil Off, as in we apply a nice coat of oil to your nose just before the FaceSitting part of your session begins and invite you to wipe it off while your nose is slipped into the underwear part of my ass that wraps up your nose, and the slippery wetness of it all allows a nice tight wedge around your nose as part of it … underwear and all … slips into my butt hole.

I’ve also done away with the sexy Victoria Secret satin lingerie panties and have gone for full cotton instead as that not only soaks up a great deal more oil, but when wet it creates a nice thick and damp seal for your nose.

Mistress Wael was nice enough to hold the guys head down so there was no last second twisting upon the final seal of nose to ass and not wanting my expensive silk panties to go to waste I stuffed them crotch first into his mouth and let him suck something else while trying to breathe.

The result?  Ah , the perfect sound of desperate gasping for air every time me or Mistress Wael lifted off his face, and saw his river of tears slosh over his face as he sucked in air for the 5 seconds we give him between rounds. 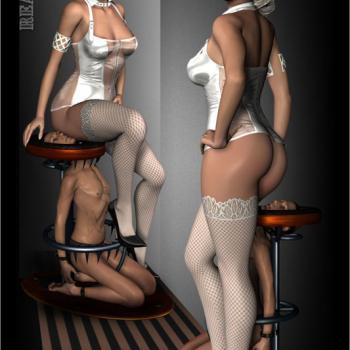 Those of you who have done a FaceSitting session with me know that I start the counting at a very low manageable number like 15 and we work up from there, building up your FaceSitting resistance so to speak.  Well this guy who stated in his email many times that he could easily get to 100 and wanted to be truly tested didn’t even get to half of what he boasted he could do.  At 45 Wael pushed me off him and sure enough there he was passed out cold.  Now, I shouldn’t laugh, I mean it is kind of serious and I wouldn’t go to such serious lengths if by myself, but this Manchester guy had his nose so far up my ass that when Wael pushed me off it made a popping sound louder than what you would hear if we popped a champagne cork in the room.  Except the sound, loud as it was, sounded more like if I threw my period soaked tampon at a wall … “spleuk” , something like that.

He came to with us rolling on the bed laughing and when he asked what was so funny all I could say back to him was “Spleuk”.  In fact, the sound was so memorable that this guys name in my email has been changed to Spleuky the FaceSitting guy.

On a more serious note, it’s well obvious to me and Wael that counting to anything above 40 has increasing danger to it and I’m not going to push the limits of people unless she’s there to assist me.  Last thing I need is a guy to die from one of my FaceSitting sessions, even if it did mean going out with a smile on your face.  The hassle of it all isn’t worth it.  I’d have to go bury you, then get a gravestone and have “Here Lies Spleuky, A FaceSitting Caualty” carved on it.

And my word of advice for the rest of you FaceSitting lovers?  Go buy some Gillyweed.