What if, in your Tease & Denial session, we took the onus of controlling your ejaculation out of my hands and put it instead into yours?  Mistress Wael’s Tease & Denial game “20” is going to train you to have such lasting power that the next time you bang your wife or girlfriend she’s gonna feel hotter than a freshly fucked fox in a forest.

The Chance of You Reaching 20 is inversely proportional to the length of time your Tease & Denial session has lasted. 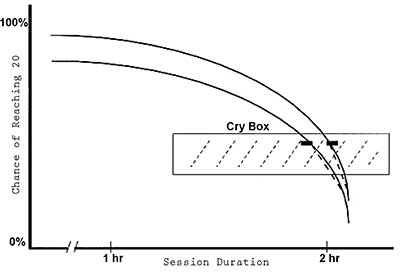 Thus the crying, or what I call the cry box, that point where you not only realize the futility of the game as you come to terms with the fact that your chance to reach orgasm has long since passed by, but also caused by the realization that you most likely will be leaving the session with a massive set of blue balls.  Your chance to reach orgasm, which you are allowed to do if and only if you can last until either me or Wael has counted to 20 is at its highest when we begin.  Each edging, which you are responsible for calling if you think you will ejaculate before we’ve reached “20” dramatically reduces the amount of time you will last on the subsequent count.  So if you managed to almost make it but had to call out STOP at 18, it is quite likely that the next time we begin you will reach ejaculation at 15 and will have to call out STOP much sooner than the previous attempt.

They begin escalating as well and might well work if not for our second enforced rule of the game and that is :  you are not allowed to move, wince, blink, twitch or make a sound during the count.  You need to focus stone faced upon my eyes or Mistress Wael’s eyes without movement which goes a long way at keeping the Hulk locked up inside you … for the time being.

The frustration mounts though.  In this video I’ve cut together some of the attempts from the 45 minute mark to the 1 hour and 15 minute mark in Mistress Wael’s Tease & Denial 20 session.

Most “opt out” somewhere around the 1 hour and 15 minute mark, begging, pleading through tears for a release and an end to the game.  This is why the stat on the Tease & Denial tab of this website’s home page states that only 30% of all men are capable of lasting the entire 2 hours or reaching 20, whichever comes first.  For arguments sake, lets say you do survive and manage to count to 20 in that 2nd hour of your session giving you the waterfall release you so desperately were hoping for.  What then?

Then in your next Tease & Denial session your goal will be to count to “30”.

After that?  I dunno, we’ve never had somebody make it to 30 yet, those are uncharted Tease & Denial waters.