I get it, period play grosses you out, but hey if drinking from my furry cup when there’s a red moon rising isn’t your cup of tea – relax.  This period play fetish is about a whole different time of the month, in particular : yours!

For a proportion of women, having a guy go down on them while they’re feeling crampy and grotty is not fun. that doesn’t necessarily mean they’re repressed or afraid of their own womanhood – they’re just not into it.  I’ve been wanting to transfer that opinion over to men somehow so they can get a taste of what it’s like to actually have a period, let alone having a guy put his tongue in the nastiest of holes at the same time.  Last night I got my chance. I kind of had the perfect email one needs to put this kind of fantasy together, in this case the light bulb inducing fetish request included anal sex from a ladyboy after having been forced to cross dress with an interest in watersports thrown in as an afterthought.  With a day to plan the session I had to first get hold of Yoshi my goto ladyboy girl because only she can have guys hold that denial that it’s a girl fucking him and not a dude, even while her cock is 7 inches inside his asshole.  She’s always willing, but I had to let her know my idea ahead of time because I had doubts she’d actually want to follow through with my messy idea.

Fortunately Yoshi was in need of money so though she was grossed out by the idea I presented her with she agreed to do it anyways.  Great, that left just a short shopping trip to pick up a few essential details …

So the guy drops by that evening at 7pm wearing short jean shorts over black pantyhose, a unbuttoned white shirt 2 sizes too tight for him and a wispy scarf flopped over his left shoulder.  I wish my condo had a back door to sneak people in, sigh.  Upstairs we go and in the lift I asked him if he was on his period while complementing him after on how much of a girl he looks like already before any makeup that he must have a period now and then.

He laughed.  Not knowing that with  period play on the menu for the evening, he was about to be prepped for his first ever bought of menstrual cramps and bleeding.  First thing we did is bent him over the toilet in the bath room and after mixing the enema wash kit with the red dye we inserted just a bit into his ass.  We sealed it with a butt plug and covered it thereafter with one of the extra large maxi pads I had bought.  I don’t know if such a large pussy exists in the world for that maxi pad to fit all of it, but if it does exist then the loch ness monster might be the least of our worries if that girl decides to populate.

It fit him though, all that was left to do was to feed the poor boy because you can’t have a period without cramps.  What better way to ensure cramps on demand than to coat some cookies with Exlax and mix it into a nice Dairy Queen Blizzard.  Yoshi spoon fed him while I sat on the couch playing with his dick and he eagerly gulped down the whole thing, pausing now and then to lick up the dribble from her breast in between bites.

In exactly 20 minutes thereafter he was begging to go to the bathroom.

“Not until you’ve been fucked on your period play boy”

I replied taking him by the hand to lead him into the bathroom.  I sat on the toilet and made him crawl towards me while Yoshi prepared to mount him from behind.  When I opened my legs he saw for the first time my red stained panties, bought earlier for 90 baht as I knew they’d be throwaways.  I’d worn them the past 3 hours without a pad so it was quite obvious they had absorbed some serious leakage.

“So, for all the blood that’s going to come out of your ass in a moment, you’re going to refill it by sucking the blood out of these panties.” and as I finished saying that I had taken them off and pushed them forcefully into his mouth taping over it with the duct tape I use for my lighting kit when we shoot videos.

Yoshi took out the butt plug and with my flogger she immediately spanked him 5 times hard to cause his asshole to contract rather than to spit.

“You’re going to hold in your period right to the very end, I want no mess on these tiles understood?”

He shook his head “no” being unable to get a sound out while sucking on my bloody cotton.

Whack.  Yoshi hit him again even harder and he yelped a muffled cry. 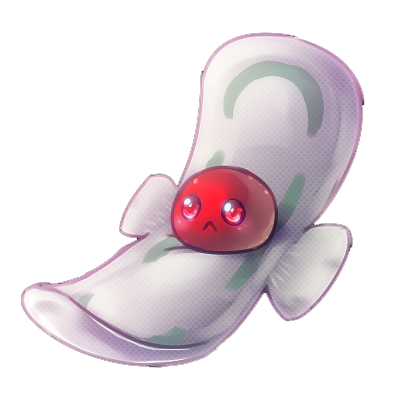 With that, she did what she does best.  Took out her tool and after pouring a generous amount of oil on her dick she entered him fully in one single stroke.  The force pushed his head right up onto the toilet seat and into my lap where I held his head and wrapped my legs around his shoulders so he wouldn’t rock as much.

Honestly, it was a bit gross and a whole lot of messiness.  Each stroke of her cock sucked out red enema fluid and it was kind of like the scene from Alien when the thing comes out of the guys chest spraying blood everywhere.  She was covered in fake blood from her stomach down to her knees and laughably the more she got on her the harder she would fuck which did nothing but escalate the mess.

In theory it was a cool idea this period play session, but as I looked around the floor at the mess I was thinking of the clean up afterwards.  Maybe for the next period play session, not so heavy on the Exlax because after Yoshi came the guy curled up on the bathroom floor in the middle of the fake blood clutching his stomach.

“Those are cramps, get used to them.”

Yoshi pulled off the tape in one motion right after I said that and he almost puked my panties out onto the floor.  He looked towards the sink to rinse his mouth of my blood but Yoshi’s cum-wet dick went balls deep into his mouth before he could get up.

a period play a day keeps the doctor away

my period play sessions are here to stay