The most wonderful moment for a man is that instant where a beautiful woman is about to pull down her panties for the first time and reveal the shape, size and contour of her bush, pussy and ass.  To my advantage, that’s also the time men are the most susceptible to suggestion.

I played the panty strip part for all the juice I could get out of it today, as I ran my fingers down past my navel, clinched a bit of the tiny fabric on each side of my luscious hips and pressed the top little hairs of my trimmed pussy to his face as i pulled them down inch by inch.  It’s a trick, I admit it.  If I did the same thing from a far it’d be a show for his gawking eyes to savor like a juicy steak being presented before your eyes at El Gaucho Steakhouse here in Bangkok.  Instead, by pressing myself up against him I stole his vision from him and though to this minute he may convincingly tell himself that he did get to see my cute little pussy just the opposite is true.

That’s not to say he didn’t enjoy feeling my pubic hair brush up against his mouth as my panties slipped down over my ass, he most certainly did.  What he did not enjoy however was the blindfold going over his eyes just as the panties hit the floor.

I grabbed him by his hair and basically pussy pushed him until he bent backwards over his knees finally resting his head on the floor with me straddling over top of him.  By doing that I removed any chance of his fingers accidentally curling up and grabbing either the lace of my Victoria Secret lingerie bottoms or my blood stained maxi pad that lay within. 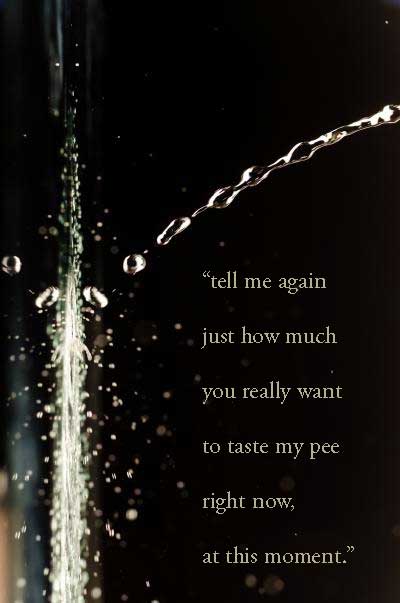 In the cute sweet innocent voice I sink into when I want my men to do things for me, I simply asked him to open his mouth and traced the outline of his lips with my finger flicking his tongue once as it came out of it’s hole in a worm like fashion looking for a taste of something sweet.

I might have the best tasting shit in the world but I’m not much of a water drinker so there’s no trace parts of mango flavor sifting around in my urine stream i’m pretty sure.  My yellow concoction is an exercise in determination for most to get it down the hatch without projectile flinging it back up into my hole seconds thereafter.  So to add any more unwanted flavor to the mix is downright cruel punishment.

As I told you men at this point are very susceptible to suggestion.  A few suggestive thoughts like the one in the photo to your left pretty much makes him convince himself that no matter how much blood and salt he’s about to receive, the taste will go down as smooth as an 18 year old shot of Scotch Whiskey.

Not only did he drink my Bloody Mary cocktail for an entire minute without spilling a drop, his first word after his last swallow was simply “delicious” spoken just as a drop of red pee fell from his lip to his chin.

I never force a man to do anything, there is no need.  With a well timed suggestion he will simply force himself to do that which I merely ask.

One Response to Piss Cocktail | My Bloody Mary