I had one of those exquisite moments where my mind linked meaning in two videos separated by a generation of time , and I was perfectly proud of myself for making the connection.  I was having one of those wonderful information quests on the internet that takes you down unexpected paths and usually lands me on a webpage that makes me gasp “how the fuck did I end up here?”

As I’m a movie aficionado my night started off as it usually does, perusing the upcoming movie trailers page on IMDB ‘s website where I was looking for something similar to WestWorld , a show that I desperately want to watch but isn’t available yet at any of my bootlegged video haunts which I frequent.  If you’ve back read my blog , heaven forbid , you’ve no doubt picked up on my interests in the parabolic growth of technology , a wave that we’re caught up in but are so blasé about. 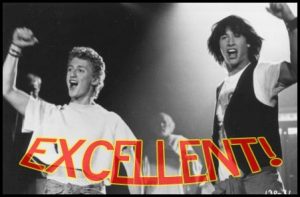 Rather than jump out of a chair and scream “holy shit , I never thought I’d EVER see that in my lifetime” people tend to shrug their shoulders every year at things that should mind boggle them … but lest I forget that societal reaction is usually akin to Bill & Ted saying “most excellent”.

So WestWorld , a very cool show it seems to me , based on an android community that seeks to rebel has really piqued my interest lately.  Whilst I”m waiting for it to be sold here I tracked down a cool trailer for an upcoming movie called Morgan , also based on a rogue android , this time a female prototype.  Oddly enough, this movie trailer was introduced by an IBM employee telling me that the trailer was created by IBM ‘s android like computer WATSON without any human interference.

Up until that very moment, Watson to me was both Sherlock Holmes’s detective assistant and a mainstream drug store chain here in Bangkok.

So curiosity bit the cat inside me and I started on my quest to find out who or what WATSON was.  That line of research eventually brought me to a YouTube video where Watson was a contestant on the American game show Jeopardy.

If anything fits the description of a :  “holy shit, I never thought I’d EVER see this in my lifetime” video … THIS IS IT.   And yes I did jump out of my chair , or my sofa as it were.  It made me want to go to the Apple store tomorrow just so that I can say to one of the phones for sale there “SIRI , you’re irrelevant already.”

Which is true.  We’ve gone from IPhone to SIRI Iphone , to Google Now , all in 7 years , and they’re already completely irrelevant and outdated.

As eerily fantastic as Watson seems to be , how fitting is it that it would be Google’s Deep Mind project that could say “Elementary my dear Watson” and get away with its condescending tone as it smirks wryly at the babbling box on Jeopardy.

One thing I’m astutely aware of is that , well if Google was a wallet , it’d be the one that says Bad Ass Motherfucker on it.

I realize this is a ‘spank your dick’ blog , and you’re not nearly into this shit as much as I am , but if you’re the one or two guys out there who is , you’re gonna love this connection that I made between the next two videos as much as I did.

The video below , if the embed works properly (cuz fuck YouTube, what the fuck is up with you guys fucking up something that was working perfectly well.  You guys working at YouTube remind me of a baby that needs it’s hands slapped when it touches something it shouldn’t) should start at the 5:47 mark , pay particular attention to the Space Invaders part where the computer is self teaching itself how to win.

Does that Space Invaders part of the video ring any bells for you?

What if I told you that you saw that exact same scene play out in a movie made thirty three years ago.  Shall we play a game?  How about Tic Tac Toe …

It’s learning, and it’s learning fast.  You might shrug your shoulders at Tic Tac Toe or Space Invaders , but how about next year when it becomes the best player in the world at StarCraft II  !!!

I’m certain that if and when Deep Mind accomplishes that feat , the accompanying YouTube video will get a few million “likes” and a few million Bill & Ted like comments saying “most excellent!!”

Meanwhile I’ll be the one jumping out of my sofa … again.

(yes i’m working on a new blog story that details a very hot girl on girl session I had , hopefully I’ll have it done by tomorrow)