The Terminator vs The World

” The Terminator vs The World ” in Theaters June 1st.

Sort of, you’ll see what I mean in a bit.

See, today is May 1st , and since I believe my country will begin to open things back up on June 1st , I’m focusing on how I might consider resuming sessions since that reality is only about 30 days away.

I gotta admit , if Covid was a poker game, and June 1st was the day countries went ‘all in’ and had to show their hands … I’d have thought the chances of my country laying down a royal flush to be slim and none  – had you asked me back in March.

But here we are at the poker table ,  with Taiwan, China, Hong Kong and my country all holding Royal Flushes, 4 Aces , Straight Flushes and Full Houses.

While USA is bluffing ,  holding only a Joker card.

Kyle Reese: “Listen, and understand. The terminator is out there. It can’t be bargained with. It can’t be reasoned with. It doesn’t feel pity, or remorse, or fear. And it absolutely will not stop, ever, until you are dead.”

From what I’ve been hearing,  some of the world is trying to put a date to the moment they think The Terminator won’t kill them , and the first  of those dates is May 15th.

So with the help of some factual figures and a percentage increase calculator I did a little math this morning,  For a (very) brief second I considered brushing off my calculus skills to calculate the upward slope of this weeks USA Active Cases curve  – but then I quickly remembered why I had to seduce a classmate and then steal the final exam to get the 81% final grade I got in that course.

Thus, I did some projections instead. 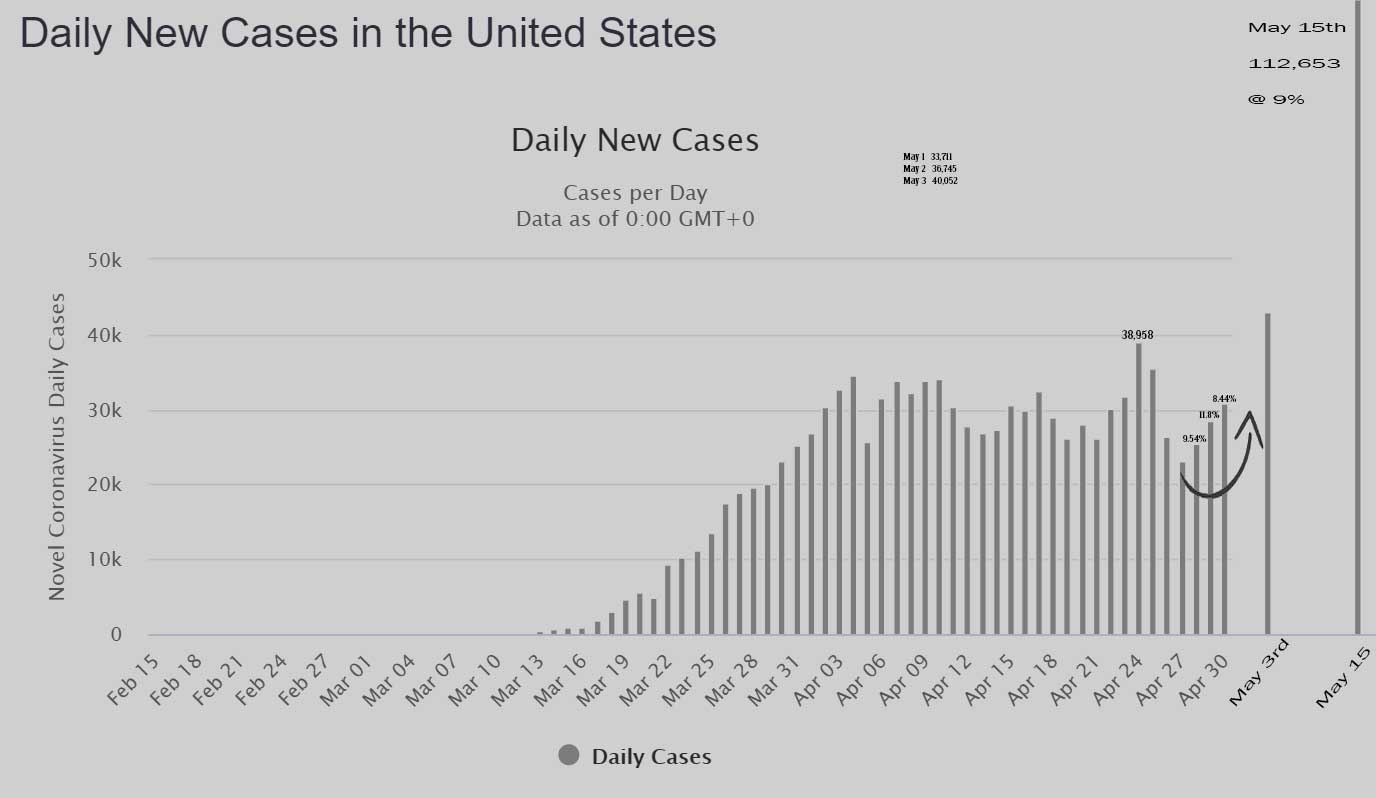 First I calculated the daily % increases of cases day over day – as USA is the only country in the world this week to record 4 and quite probably 5 consecutive upticks in active Covid cases.  That average % increase is  just under 10% , so I knocked it down to only a 9% increase for my model.

It’s a fallacy to  do so in my opinion  as each day  more and more beaches, restaurants, protests are opening up over there  –  so the % increase should probably be rounded up and not down, but I wanted the numbers I’d be calculating to err on the low end.

On April 24th USA had it’s highest # of daily new cases 38,958.   Yankee stadium holds  54,000 by comparison, so imagine a full capacity baseball game (if using the propoer 10% number) ,  but instead of fans, substitute dudes with Covid in their lungs.

On May 3rd or 4th – if we go by the same 9% growth of daily new cases USA has shown this week – they’ll top that highest number by quite a lot come Monday, surpassing 40,000 new cases in a day.

To which I asked on Twitter, does USA have any idea  whatsoever what a curve looks like?  Apparently not.

Well Faucci does, but he’s been muzzled.

This is exactly what I thought might  happen  – the economic pressure to open up will far surpass the medical pressure to keep things safe.

Which is fine in a country like mine where everybody has been wearing masks since February – anybody who’s visited here this year can attest to that.  We’ve had a 10-5 curfew for a month now, and are entering a mandated 2nd month of it – which I’m all for as preservation of life should always come first.

This is for a story I’m posting today on how I feel it’ll be quite safe to re-commence sessions – come June 1st – with those who have been domestically co-confined with me.#doAmericansKnowWhatACurveLooksLike pic.twitter.com/cCfdJc7aQj

I have internal conflict , possibly a bias , towards the average of 7 people per day here who have tested positive and less than 1 death per day.  On the one hand I can see a scenario where in a month’s time – just like Taiwan , China and Hong Kong  – the daily number will be next to 0.

On the other hand, I have an leery eye that looks over my private Twitter list and sees how many doctors point to ‘tests per capita’ and what that ratio should be to have a firm understanding of a nation’s true spread rate.

One of the greatest things about Twitter is the private list feature.   It takes time ,  but slowly one can pick out the few individuals that represent the truth when they speak, and putting them all (currently 110) into a list that only you can see – becomes a “personally selected news source of truth.”

It’s a great way to keep your ear close to the ground and see where the world truly stands at any given moment.

So where does my opinion stand , thanks to my news sources ,  regarding recommencing sessions?

Right now,  as a projection for June 1st –  I’m seriously considering seeing anyone who’s been stuck here with me since March,  so long as that person hasn’t flown back to a red zone country and returned.

So lets say you’re stuck in  Phuket and when the airports re-open  in June and you want to fly up to see me or Wael for a session – that’s a yes  in my books.

But if that same person wanted or had to quickly fly home to New York before flying back here the next  week ,  that’d be a hard no.

With the talk of the world re-opening in phases – that i guess is my own ‘phase 1’ rule. 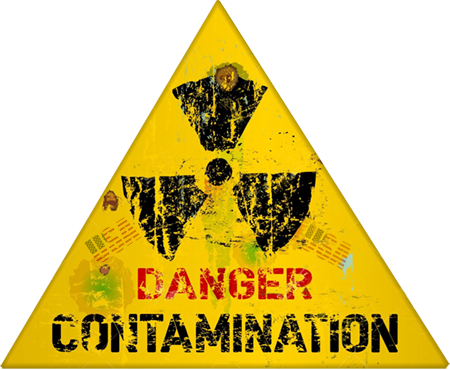 My second rule would have to do with defining what to me is a Red Zone country and what is a Green Zone country.

If said country’s contamination curve is near 0 , like Taiwan, Hong Kong, China currently are at – then that’d be a yes as well to sessions – as those countries would represent a Green Zone to me.  So long as that person hasn’t travelled to a red zone country in the meantime.  Australia , Germany , New Zealand are on my radar of  countries agressively progressing in the right direction , they’re in my yellow zone right now and I may possibly be greenlighting them come June,  we’ll  see.

A Red Zone country means either that country has a curve but that curve is still hovering at unreasonably high levels of contamination.

I think USA needs its own color.  How about yellow and black like a radioactive contamination sign?

If my chart above is anywhere close to accurate, that’d be a hard hard … like having sex with a nun type of no to seeing someone from the land of the lysol injecting brave.

Speaking of which , ever seen that SouthPark episode where Cartman finds out that people with Tourettes Syndrome can get away with whatever they uncontrollably say and then uses it to his advantage.

But as the show goes on , he starts actually blabbing out things he can’t control saying  ….

But hey, perhaps that’s what you get when you have a political system that allows a reality game show host to be president eh?

USA  vs The Terminator demands not only a front row seat , but it should be a never ending series that one can watch perpetually – kinda like The Walking Dead.

USA vs The Terminator as it turns out might actually be a prequel for USA vs The Walking Dead – if CWD ever finds its way from deers to humans.

I just love that there’s a disease out there in USA right now that not only eats through a deer’s brains , but also causes them to foam at the mouth like rabbies and turns them into savage biting predators trying to run at and bite anything they can see.

I say trying because if a particular deer has had the motor function part its brain eaten away it can’t walk normally.  So imagine a world where human zombies are all trying to bite us , and its 100% fatal if they do, but some zombies will be able to run like the ones in 28 Days Later, but some will just spin in circles while others will have a leg drag or something dehabilitating like that.

Umm,  I’m gonna go out on a limb and say a big NO to sessions with American CWD Zombies if it comes that , just so ya know my stance on that.

I  want to write something sexy.   Throw me  a bone  here guys,  I haven’t talked  to another human being in almost 2 months now , let alone do a session.

Except I’m fine with that.  I  love  all this time to be  just me and not have to put on my SuperGirl cape and interrogate a dick until it explodes.  I haven’t been ‘just me’ since 7 long years ago.

I’ve been thinking just how  exceptional this all is.  I mean, here I am writing a legitimate story about ‘red light zones’ and its not  about Amsterdam.  I’m actually writing a blog story about the safety of doing sessions without absorbing the risk of dying.  Holy shit right?

Today I’m  happy I’ve moved into a decent new condo where perhaps I’ll have to intermittently shelter in place in over the next 12 months.

I’ve gone from tyring to learn just how big is a billion in March when I was thinking the # of infections compared with China’s total population was infinitesimally small  – to feeling astonished that The World is considering saying ‘fuck you’ to  The Terminator already.

This isn’t a zero sum game.  Either The Covid Terminator is going to  win,  or the collective free thinking world population is right and they’ll win.