Seemingly for over a month I can’t find it within me to construct a story that’s worth writing let alone reading.   The roots of the problem no doubt can be traced  back to these bouts of self inspection, depression and goal-less-ness that I’ve been plagued with from about October onward ’til now.

That’s not to say however that I haven’t  had some great thoughts pass through my mind.  My phone and  my laptop have a notes section which  gets filled with random  thoughts, memories,  recordings and  the occasional video – and it’s from these that in the past , when allowed to  marinade like a good steak in the fridge , produce some fine story lines.

So since that hasn’t been the case , it occurred to me tonight that  perhaps you’d might find it comical if not  somewhat fascinating  to see what my mind  has  fixated upon  at different points  over the past thirty days.

Thus, with no  further adieu  , here’s either a ‘one and  done’ or ‘the first of many’ 21 of my most recent random thoughts :

2.  In Demi Moore’s movie The Seventh Sign there’s a bit of dialogue that really struck a chord with me , and since it resonates with what I’m going through now ; haunts me.   It reads as such  :

“ln Judeo-Christian mythology, The Guf is the Hall of Souls.

“Every time an infant is born, this is where its soul comes from.

“Folklore says sparrows can see the soul`s descent and this explains their song.

“But a day will come when the sparrow sings no more…

“…because there are only a finite number of souls in The Guf.

“lt`s when the last soul is used, and The Guf is empty, that the world will end.

Which is more or  less how I feel my life will end.  Oh for certain the world will go on , no need to fret about that.   However the concept of their being a finite number of souls in the Guf  – when I relate that to how I feel that after each session I do I feel I’ve emptied my soul a little more, and a little more.  Surely there can only be a finite amount of sadness I can feel,  yes? No?

See, I have this ability to make people feel  very happy, and yet  each   time  somebody leaves  my place dancing  on  air  , I  slip  a bit further towards emptiness.    Talk about a zero sum job , huh.

3.   I  suppose if I wrote  in  my blog that  I haven’t  left my condo in 5 days , and nor have I  talked to anyone that it would read as something  alarming.     Whereas in fact, I  find lately that the more I shut  out  the world, the happier I am.

4.   Be it my phone  when  I type , or my laptop here  at home, why  does   my space  bar voluntarily add unnecessary spaces at  random?

5.  When I let go of my goal last year to pick up the German language and continue my education oversees ,  I floated aimlessly for a while looking for a new purpose to my life.  That led to an uncountable amount times where I’d stare at the stars with tears  in  my  eyes in the middle of the night.   It took a while for  me to  realise  that the   only time I was without thought was my two hours in the gym every  afternoon.  Which became  2  1/2 hour workouts.    Then 3 hours.   It got to the  point where my legs were so sore from squatting barbells that if my bdsm  session that evening required me to fuck  the guy’s ass doggy style –  my legs would  seize   up on me and I’d  have  to  collapse onto  the guys back  and hold on for dear life until my thighs would stop  convulsing.

7.  What the first third  of  the year  did though  was  convince  myself that it wasn’t a vain thing to do … to  change my body from hot  to drop  dead gorgeous  , be it  through exercise or surgery.   That has become my current goal ,  and judging by my latest tweet on Twitter ,  it’s making guys lose their  fucking minds.    Especially when they are seeing me in person for the first time as the most frequent  compliment laid at my feet is that I’m infinitely hotter live  than in my  photos.   A neat trick  since  my photos are pretty  damn  hot to start with.

Am I more kissable , or more fuckable in this photo?

8.    You see,  a great deal of confidence is needed  to be an elite mistress.    I love that natural feeling of knowing I can knock men off their feet  just  by walking down to Starbucks in  my  shorts ,  with no makeup ,  10  minutes after I’ve woken up.     So if  that  truly is what  I’m  good at ,   then for  fuck sakes,   why not just go “all-in” with my looks.   I’m  talking boobs, eyes, lips,  nose , ass – fucking everything.  There are but a small handful  of truly drop dead  gorgeous bdsm mistress’s in the  world – that I’ve seen on Twitter.   I no longer  want to  be one of  the  best , I simply want  to be the de facto – hottest mistress  in the world.    Not  surprisingly  … the sessions as  the year has gone on have truly blown guys away : 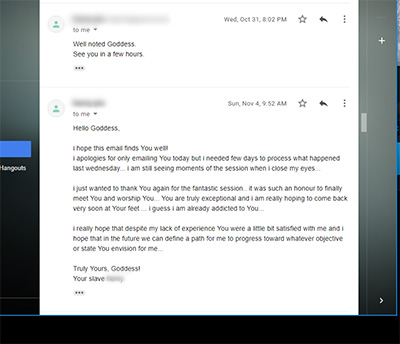 i hope this email finds You well!
i apologies for only emailing You today but i needed few days to process what happened last wednesday… i am still seeing moments of the session when i close my eyes…

i just wanted to thank You again for the fantastic session.. it was such an honour to finally meet You and worship You… You are truly exceptional and i am really hoping to come back very soon at Your feet … i guess i am already addicted to You…

Truly Yours, Goddess!
Your slave

10.  Ten is the consecutive #  of sessions  I’ve  done that have been  vacation / Mistress Girlfriend multiple day excursions.  Lately,  these are the only sessions that truly fascinate me.  But they’re also a bloody nightmare for the guy(s) who don’t quite “get” what having a BDSM Mistress as a girlfriend would truly be like.   Those expecting love,  romance to bloom over a candlelight dinner , and hot passionate sex – find both the time spent with me  and the 10,000/day to go with it a horrible investment.  You’re lucky if you get to worship my ass while  not  in public.   You’re just as likely  to  be chained to the end of the bed and sleeping on the floor  as you are to be sleeping with your nose  in my ass all night.   But ya,  you’ll fall in love  , that’s a certainty.    However, me  falling in love  with you –  you’d have a  better chance getting a  fat  kid  to eat  broccoli.

11.   I”m  enjoying these extended multi-day sessions so much that – under certain circumstances – I’m now accepting such sessions in Europe starting in 2019.   The circumstances are strict though, a number  of conditions  must  be  met , and those  are :  a) we’ve  had previous mutually enjoyable sessions  here in Bangkok.    b)  You’re providing both the flight and accommodation.  c) unless we’re talking about a  period of time longer than a few days,  the tribute is  $10,000  baht per day.    Negotiable if we’re talking about a multi-week stay.   d) I’m not your  24/7 mistress.    My true personality drives men to utter frustration / madness,  or it drives them bat-shit wild  ;  and walking  that line  fascinates you.

12.  Thanks to my fake job,  paying me fake money  with  fake job slips ,  visas  to anywhere in  the world are no longer a problem.   Which  begs  the  saying,  ‘if you’re  gonna live right downtown in the world’s cesspool of humanity,  might  as well make corruption  work for you.”   amiright?  🙂

14.   Just like it’s  (super) hard to find a guy who knows how to keep his mouth on  my  pussy long after he’s eaten me  to  orgasm  , giving  me  time  to come  down  the  mountain …  it’s (super) important to keep pumping the guy’s dick slower and tighter to get every  last drop out  after the  2 hour  build up  has been released.   Knowing how to properly  handle a  guy’s   dick in those 60 seconds after orgasm is the   difference between  a  great  session  and  a fabulous  one.

15.  This guy found out the hard way that it’s MUCH better to wait for me in the event a  session can’t  be immediately booked.   The Tease  & Denial experience at anyplace elsewhere is “meh” at  best: 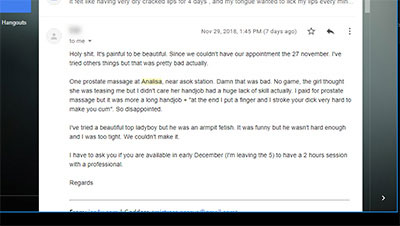 Holy shit. It’s painful to be beautiful. Since we couldn’t have our appointment the 27 november. I’ve tried others things but that was pretty bad actually.

I’ve tried a beautiful top ladyboy but he was an armpit fetish. It was funny but he wasn’t hard enough and I was too tight. We couldn’t make it.

I have to ask you if you are available in early December (I’m leaving the 5) to have a 2 hours session with a professional.

17.   To pass the boredom on the occasional night I don’t have  a session  , I’ll play with Tinder ,  chatting  up hot guys to make them horny  – and frustrating all their plots to find ways to meet me.   This  week when I went down to the lobby to meet “Alex”  29yo from London  , who wanted to be walked like a dog with his nose in my ass (as  per  his session request email) I was the first to burst out laughing because he was the guy  I  had  just been  flirting  with earlier that afternoon from the gym on my  Tinder  account.  He didn’t  catch on right away to who I was ‘cuz  my  Tinder photo is a grungy one of me on vacation , not comparable to the  “damn girl” look I present myself with for our  sessions.  So  I  took out  my  phone ,  went to our conversation we  had had  earlier , and flipped to the part where he  sms’d  me :  “you’ve never met a guy like me before” and  made him read it.   When the lightbulb went off in his head and  he  turned  beat  red  in the  face  I pinched  him by his  nose  and  said “truth is, you’ve never  met a GIRL – like me before.”   Then showed  him  my ass and continued “woof  woof” .

18.   The Tinder mentality in these parts is that once you  get  the girl  to  meet  you , it’s a guaranteed lay.    Alex REALLY tried to ignore all  his submissive emails  as if he never sent  them  ,  and erroneously held on to his Tinder Mantra that I must somehow be a sure lay.   Those types  of sessions  are  the  absolute  worst ,  it’s a battle of egos and wits ,  one that I never  lose.   Guess  how many minutes that session lasted before  he  was shown the door,  lol.

19.   Lots of guys were stunned to find out via my Twitter that I don’t celebrate any of the holidays here, including the recently passed Loi Kratong.    I can’t believe littering the ocean with  69 million plastic boats of flowers is still considered a good idea on this side of the world.   I am up for a good Turkey Dinner though this Christmas ,  anyone gonna  invite me to meet  the  ‘fam over the holidays?  Ya, didn’t think so lol.

20.   The best way to follow me  in  the  times I’m not  writing many stories is via my Twitter account.    Unlike everybody else who uses Twitter  to promote themselves or their services , I use  it only  to display my personality,  my thoughts,  and my sense of humour.   It’s why I  don’t have a billion followers  , but the one’s I do  have  really do get  to know me on a more personal level.   I  reply  to  all  comments too , so feel free to say what’s on  your mind when I  tweet  something.

21.    I’m gonna take Christmas and New Years off this year.   In prior years I’ve done sessions straight through the holidays.   Not so this time around.   Mistress Wael will take over emails and blog stories for the week or so that I’m off.